This bridleway (3km each way) winds through the spoil heaps and old quarries of Tilberthwaite and Hodge Close, ending up at Little Langdale Ford and Slater Bridge - OS Explorer Map OL7.

Route for some. 6km distance.

From the car park, follow the tarmac road to its end at High Tilberthwaite Farm. Take care through the busy working farmyard and go through the right-most gate. The track rises for a short section and then bends left to follow lower ground between Tilberthwaite and Hodge Close quarries.

As you go further north, and through another gate, evidence of past mining activity is all around. Tilberthwaite and Hodge Close were significant open slate mines in the 19th century and the huge spoil heaps of slate are the most obvious remains. The industry declined through the 20th century and the quarries have been closed for decades now.

The track descends round a left hand bend to a woodland glade. Ignore the track going off to the right (NY 313020) and stay left heading north to Little Langdale. After another kilometre you arrive at the bridge and ford over the River Brathay. Turn left along the old quarry road and after a further 0.5 km or 0.3 miles you reach the delightful and ancient Slater Bridge, a 17th century packhorse bridge which, as its name implies, was built to serve the nearby slate quarries. 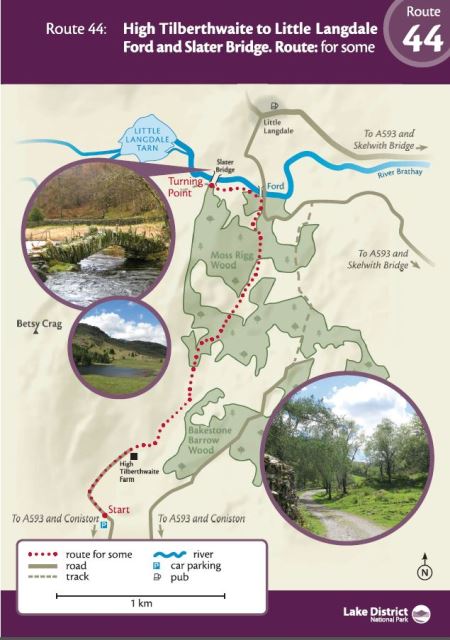 None on route but Three Shires Inn is 0.5 km or 0.3 miles north in Little Langdale

Car: A593 from Ambleside to Coniston. Turn sharp right onto the minor road signposted Tilberthwaite and follow for 1.5 km or 0.9 miles to car park on left. There are no buses to the start point.