For Station Coppice, leave the lay-by by a path at its northern end and pass through a gate. The route undulates along a well surfaced path, including a short, steep section with a 1:9 gradient and finishes at a wooden bench. The wooded hills of High Seat and Bleaberry Fell can be seen across the water.

Thirlmere was created as a reservoir in the late Victorian era. Previously, two small tarns, Leathes Water and Wythburn Water, were connected by a stream and small causeway bridge. They all disappeared - along with a hamlet and pub - when the valley floor was flooded.

On the other side of the reservoir, Armboth car park is the starting point for the other walk. Leave the car park to the right and head south on a wide, smooth path to the lakeshore, taking the left fork at a junction. From here you get fantastic views of the steep eastern slops of Helvellyn. There is a loop path back to the junction mentioned previously. It has a rougher surface, but is still suitable for wheelchairs and pushchairs. 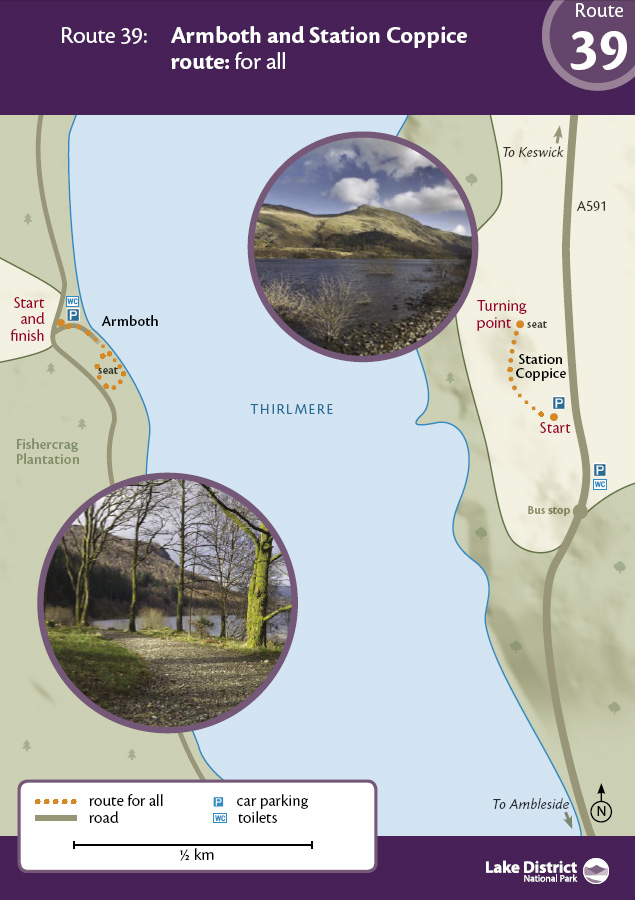 Bus: Station Coppice, the 555 Kendal to Keswick service runs along the A591 all year round and stops at Swirls. Car: A591 from Keswick or Ambleside to Swirls car park for Station Coppice. For Armboth, the minor road left from Legburthwaite, just beyond the St John’s in the Vale junction.