A tranquil, riverside walk next to the stunning ruins of Calder Abbey, described as one of Britain’s most enchanting ecclesiastic relics - OS Explorer Map OL6

Route for all. 2km distance.

From the car park, head towards St. Bridget's Church and go through a metal gate on the left. The path winds gently downhill, crossing a small stream and raised causeway to the wooded banks of the River Calder.

This is a particularly beautiful stretch of the river. The sandstone cliffs on the far banks are dramatic and the river alternates between deep pools and fast stretches. It is a popular spot for trout and salmon fishermen. Look out for dippers and wagtails, as well as herons and kingfishers.

After 1 km, you arrive at the boundary of Calder Abbey. There is no access to the ruins, as they are in private grounds, but you can get a sense of the grandeur and importance of the Abbey in medieval times. Founded in 1134 by Ranulph de Meschines, Lord of Copeland, for a colony of monks from Furness Abbey, it was originally a Benedictine monastery. The Abbey has been described as one of the most enchanting in the British Isles. You have to return to Calder Bridge the same way. 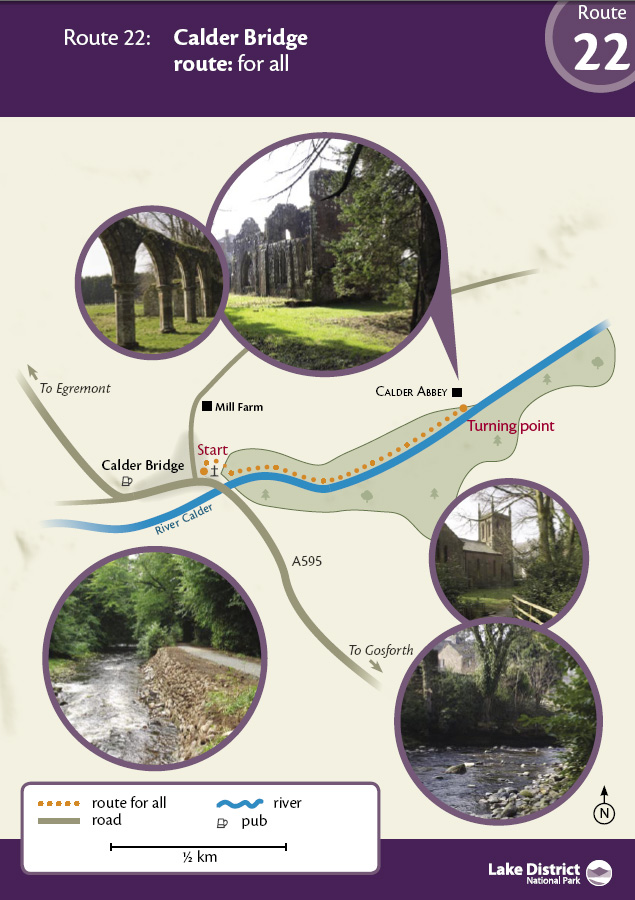 Small informal car park near the church at Calder Bridge

None on route, but there is a pub in Calder Bridge.