This linear route (1.25km each way) takes you past historic Mirehouse and on to ancient St. Bega’s Church - OS Explorer Map OL4

Route for many. 2.5km distance.

From Dodd Wood car park, drop steeply on a 1:10 gradient and carefully cross the A591 to a gated public footpath to the left of a roadside cottage which leads to Mirehouse. Wheelchair users may find this difficult as it requires going along a short stretch of grass verge as seen in this image. Do not use the private driveway.

The path continues by the grounds and driveway of the stately manor and provides fine views of the house and gardens. Built by the Earl of Derby in 1666, it is now owned by the Spedding family.

The path passes Mirehouse to the west and follows undulating meadows to St. Bega's. The pre-Norman church has interesting features such as a 13th century font and large 14th century cross.

The views are wide-reaching from here, with the ridges of Broom Fell and Lord's Seat over Bassenthwaite Lake and Ullock Pike and Carlside to your right.

For this route, you need to retrace your steps. There are other accessible paths in the grounds of Mirehouse, but they are not public rights of way and you need to buy a ticket to use them. They are on sale in the Old Sawmill tearoom - more details at www.mirehouse.com.

Please note that the map below has not yet been updated. This is a 'for many' standard route. 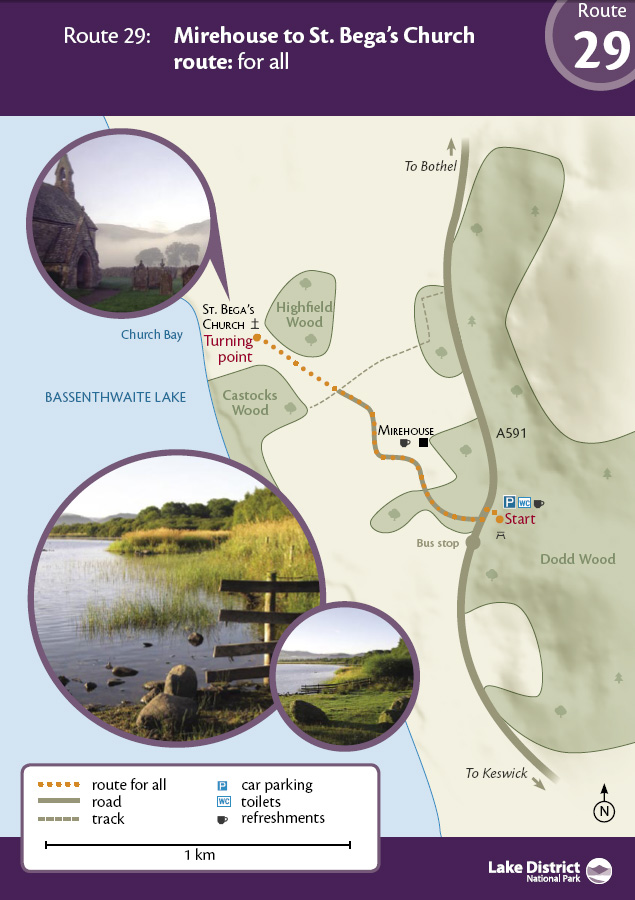 Bus: The X4 service goes to Mirehouse from Keswick, Cockermouth and Workington. Service 555 runs from Carlisle to Keswick via Mirehouse. Car: A591 north out of Keswick for 5 km.