Update 24 Feb 2022:  The 'for many' alternative alongside the road currently only meets 'for some' standards after winter storms.

Set in the beautiful western village of Ravenglass, this is a walk back in time to one of the tallest remaining Roman buildings in the country OS Explorer Map OL6

Route for all. 2.2km distance.

For us, this route is all about history. A short stroll or ride out from Ravenglass, a charming village packed full of heritage, the route takes you along the edge of the estuary to the to the remains of the bath house of Ravenglass Roman fort, established in AD 130. This route is worth celebrating as it is an easy way to discover our Roman history, which is evident throughout the Lake District National Park, and you'll be in not one but two World Heritage Sites!

Ravenglass is an historic national park coastal hamlet, lying on the estuary of three rivers - the Esk, Mite and Irt. It became an important naval base for the Romans in the 2nd century. Little remains of their large fort, Glannoventa, except for the remarkable bath house, now known as Walls Castle. This is one of the largest surviving Roman structures in England, measuring about 15 metres by 30 metres, with walls 4 metres high. It housed everything from hot saunas to cold baths.

At the far end of the station car park pass to the left of the Ravenglass Railway ticket office, then bear left and then right to ascend the slope to the bridge over the main line railway. Turn left, signed Roman Villa, away from the railway, onto a smooth surfaced path which heads gently down to the road. Turn right on to the tarmac private road to the Bath House ruins.

The path 'For All' follows this road. There is an off-road path 'For Many' (which currently only meets 'For Some' standards) to the left of the road. 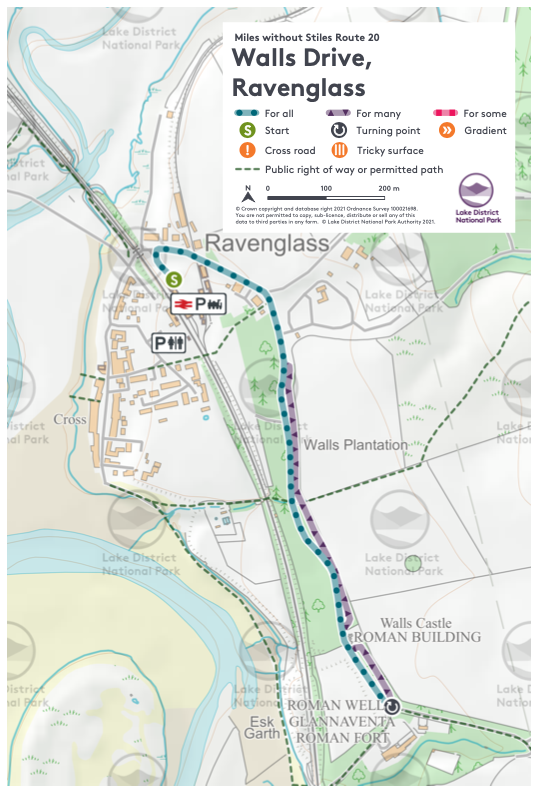 Accessible toilets (with baby changing and disabled facilities) and a café on the platform at the station (available when railway is operating). Additional parking in Ravenglass village pay and display CP with toilets (including both accessible and baby change, radar key required) on the access road to that car park. There are pubs, a hotel and tea rooms in Ravenglass village.

Train: Station at Ravenglass. Trains from Lancaster and Arnside in the south and Workington and Carlisle in the north. Bus: There is currently no bus service to the village. Car: A590 from Kendal and take the A5092 and A595 beyond Broughton in Furness. From the north, follow the A595.