The trail is officially opened!

Watch the video of the official opening of the Keswick to Threlkeld trail, hear from the team behind the project and the local communities of Keswick and Threlkeld celebrating on a snowy day in December 2020,  five years on from Storm Desmond.

Map of the full trail: 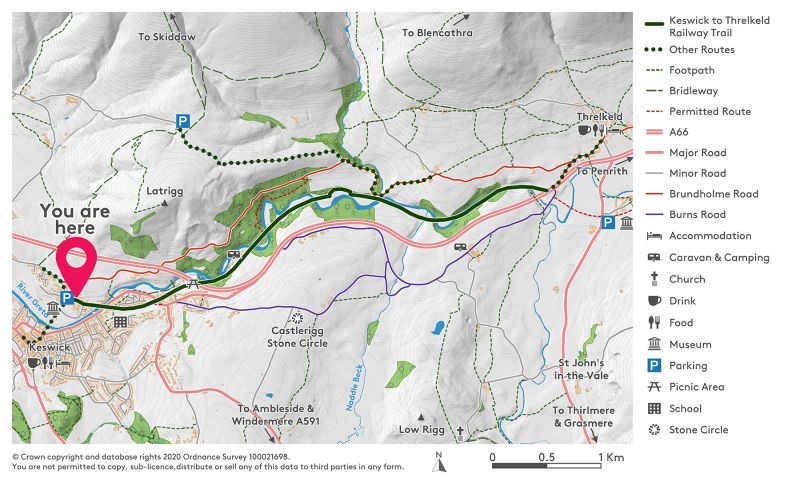 Exactly five years after Storm Desmond hit Cumbria and destroyed the Keswick to Threlkeld Railway trail, the new and improved route was opened for the local community and visitors to enjoy.

To mark the occasion, two local school children from Threlkeld and St Herbert’s Primary Schools were the first through the Bobbin Mill tunnel which had been re-opened for the first time in nearly 50 years as part of the £7.9 million project to fully reconnect the route.

Monty and Holly both aged 10, were joined by the Mayor of Keswick, Paul Titley, Chief Executive of the Lake District National Park Authority, Richard Leafe, along with various other community and partner representatives for a socially distanced celebration.

The Keswick to Threlkeld Railway trail has been fully reconnected and enhanced, new picnic benches, seats and perches at viewpoints have been installed as well as new comprehensive on-site interpretation to fully tell the national park local history and heritage story of the trail and give information on local wildlife and flora and fauna.

In 2015 Storm Desmond brought the worst floods the county has seen, with around 178.4 mm of rain falling in Keswick. As a result two of the original Victorian railway bridges that cross the River Greta and around 200 metres of path were completely washed away, Rawsomes Bridge was deemed unsafe and the well-used route between Keswick and Threlkeld was completely cut off.

As much as possible the Lake District National Park found some alternative routes but through feedback it was clear how important the route was to the communities of Keswick and Threlkeld, visitors to the area and to local businesses. As part of the design stage, a survey showed that the reconnection of the trail could be worth around £2 million to the local economy.

The extensive reconnection project has included:

Richard Leafe, Chief Executive of the Lake District National Park Authority said: “This has been the most ambitious construction project we’ve undertaken as a National Park Authority. It’s taken five years to complete due to the scale, but we’re thrilled to be able to reopen the trail on the anniversary of Storm Desmond. I’d like to thank all of our funders and project partners for their input and the local community for their initial fundraising and for their patience whilst the work was ongoing. I very much look forward to using the trail and seeing others make use of this fantastic safe, local route which provides a sustainable transport link between Keswick and Threlkeld.”

A £7.9 million package was agreed to enable the project to go ahead and consisted of funding from the European Structural Investment Funds which supports innovation, businesses, low carbon activity to improve local growth and create jobs. Funding was also received from Highways England, Cumbria Local Enterprise Partnership and the Lake District Foundation.

Bruce Parker, Highways England’s head of planning and development for the North West, said: “As part of our ongoing commitment to giving cyclists and pedestrians a better deal along our major A roads network, including the A66, we were delighted to be able to provide almost half the money needed to restore and enhance the link between Keswick and Threlkeld.  It is fitting that the route has re-opened today exactly five years after it was so badly damaged by Storm Desmond.

“The route provides a much safer and far more pleasant alternative to cyclists and pedestrians using the busy A66 and we hope it is used and enjoyed for many years to come.”

Jim Jackson, Chair of Cumbria Local Enterprise Partnership’s Investment Panel, said: “We are delighted that with the assistance of a £300,000 contribution from the Local Growth Fund, the Keswick to Threlkeld Railway Path is set to reopen to the public. This much-loved route will strengthen the visitor experience and economic performance of the Lake District National Park. We’re looking forward to seeing both Keswick and Threlkeld communities benefit as visitors enjoy the route once again.”

Additionally the Lake District foundation led a fundraising campaign which was supported by the local community, with businesses, residents, visitors and organisations all playing their part in raising money through everything from duck races to online auctions.

Sarah Swindley, the Lake District Foundation’s CEO, commented: “The community fundraising campaign raised an incredible £130,000. We were thrilled to have had so much support from the local community, businesses, residents, visitors and organisations; everyone played their part to make it happen. We would like to say a huge thank-you to everyone who donated during the campaign. We are looking forward to the opening this Saturday and for everyone to enjoy the new path for years to come.”

The Capita team who project managed and Cubby Construction, who carried out the building works associated with this project, are based locally and delivered a high quality work that meets user need and respects the special place the trail passes through.

On the right track with new logo

A new logo was created as part of the project, which features on way-markers and information panels along the trail. It consists of a native water crowfoot flower and a railway wheel, which perfectly blends local flora and fauna, gives a nod to railway engineering and clearly depicts a place where nature and heritage thrive.

The on-site interpretation includes bitesize local nature information along the trail, larger panels on the railway and the bobbin history and information on Storm Desmond’s impact to the trail and local area.

Due to covid-19 restrictions, an online information sharing session took place to gauge opinion on the proposals for on-site interpretation and included members of Keswick Town Council, Friends of the Lake District and various community representatives along with Lake District National Park Area Ranger Cath Johnson.

A number of alterations and additions to the onsite communications plan were suggested by community representatives, discussed fully and were included in the final interpretations.

Cath Johnson, Area Ranger with the Lake District National Park said: “We would like to thank everyone involved in the information session who helped us shape our on-site interpretation, their local knowledge was really helpful and we’re very happy with how the interpretation has taken shape to really enhance the trail for all users.

“We’d also like to thank the local community, once again, for their support with the project through fundraising, which was crucial in enabling the project to go ahead. We know that the local community is now every bit as excited as us to see the trail back in use for the first time in nearly five years and it’s full steam ahead for December.”

Thanks to a £7.9 million funding package from Highways England, the European Structural and Investment Funds, the Local Enterprise Partnership and community support from the Lake District Foundation work is due to be completed on the Keswick to Threlkeld trail in December.

Thank you to Cubby Construction for this video showing progress up until June 2020 on many areas of the project.

Thank you to Cubby Construction for this video of Low Pearson's Bridge being launched over the River Greta. It's important to highlight that this was filmed on March 6, prior to any social distancing restrictions due to Covid-19.

The western arch of the big tunnel or Bobbin tunnel sees light after 40 years of being buried during the construction of the Greta Bridge in the 1970s. 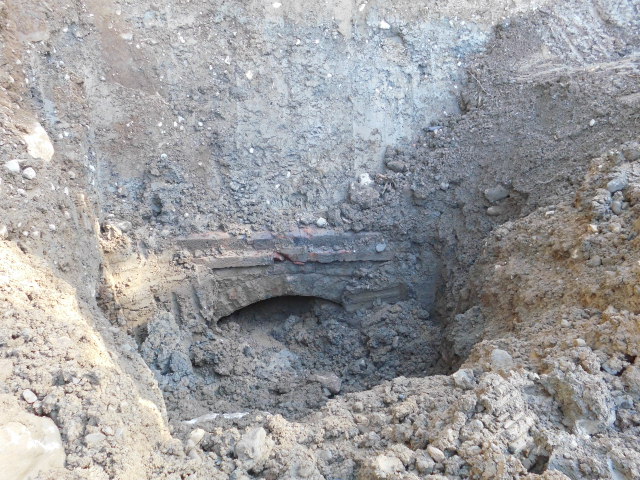 See our plan to reconnect the Keswick to Threlkeld Railway trail below. 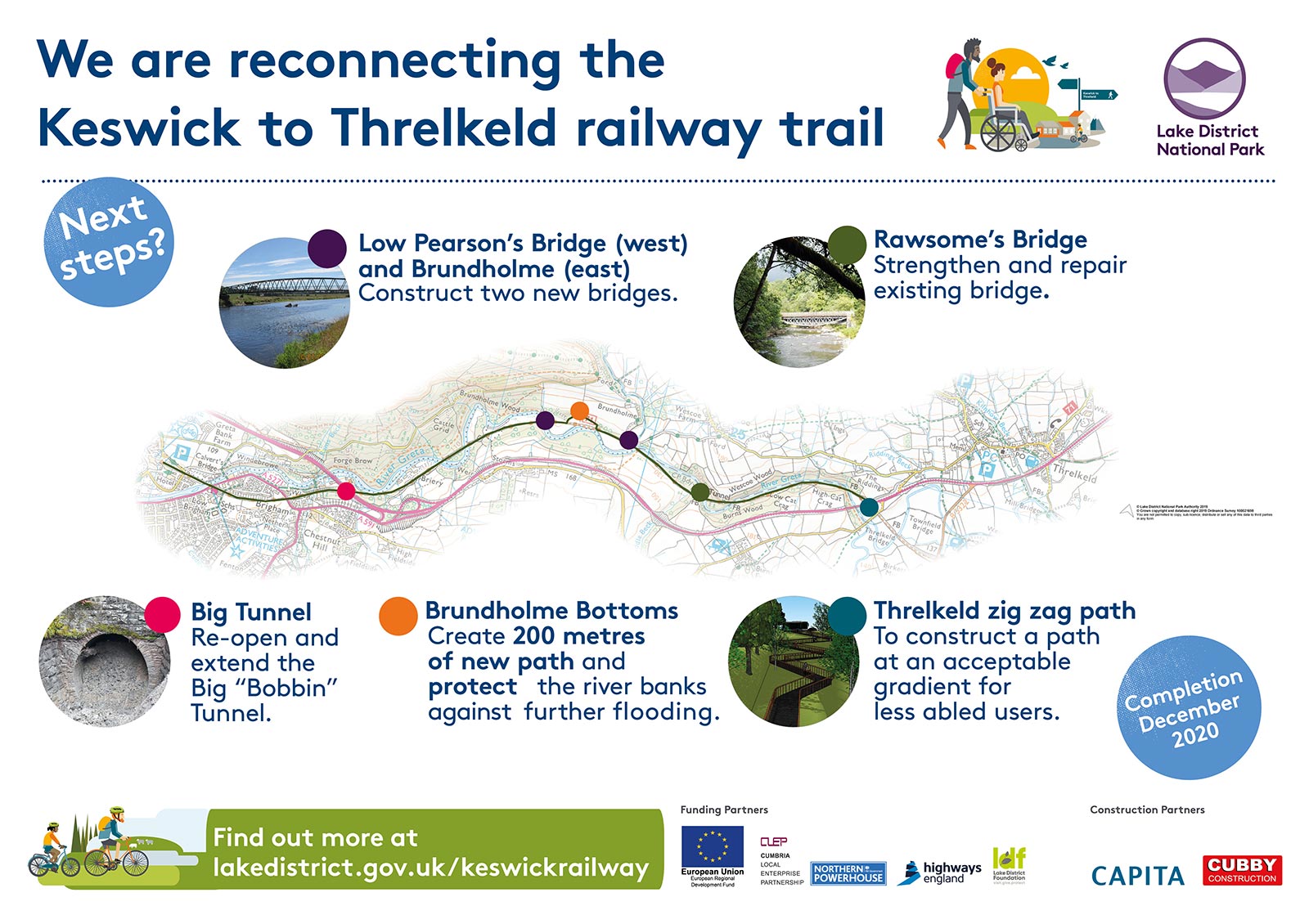 Our plan to reconnect the Keswick to Threlkeld railway multi-user route.
Click image for a larger version. 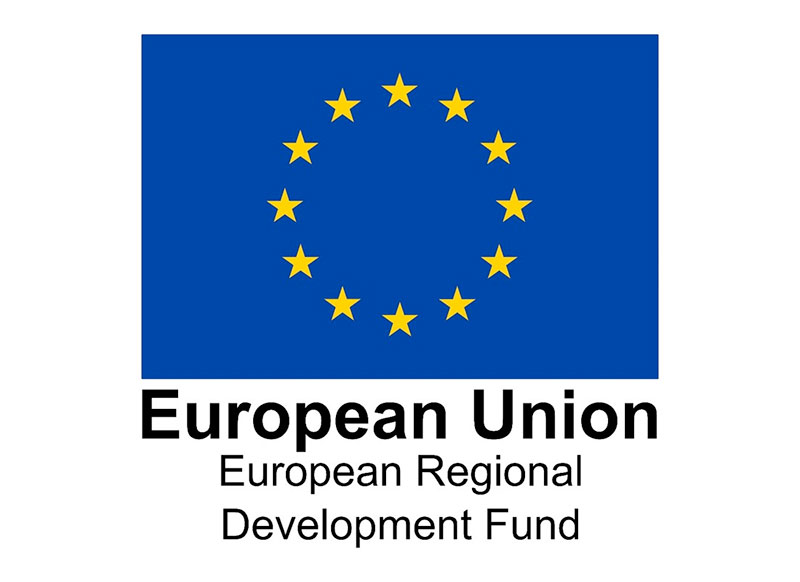