Take a look at what's going in and around the East of the Lake District:

Do you fancy doing your bit to give Ullswater a Spring Clean this March? Distant Horizons and the Lake District National Park are once again organising a canoe and land-based litter pick this March in a bid to help make it a cleaner place to live, visit and enjoy. The Litter Pick is taking place on 6 March, at Ullswater Yacht Club from 9.30 – 1pm.

On the water, Distant Horizons will launch their fleet of canoes from Ullswater Yacht Club to enable volunteers to easily access the shoreline to gather litter which has blown down the lake over the past year. Distant Horizons will provide qualified canoe guides, all canoe equipment, buoyancy aids etc, and will raft the canoes together to make sturdy litter carrying vessels.

On land, volunteers will collect litter from key locations around Ullswater, and along the Ullswater Way.  All litter picking equipment is provided, so all you need to do is bring yourselves, wellies and warm/waterproof clothing.

Well-earned hot drinks and cakes will also be on offer after the litter pick in the Yacht Club.

For more details and to register for either canoeing, or the land based litter pick: please ring 01768 871409 or email suzyhankin@lakedistrict.gov.uk

The Ullswater Valley Plan – What happened!?

The Plan has led to a number of projects being developed and pursued:

The Ullswater Valley Plan continues to provide evidence and support for projects within the Ullswater area. For more information about the project see: www.lakedistrict.gov.uk/ullswaterway

More than 100 school children from the Ullswater area became official members of the ‘great outdoors’ at the Ullswater Outdoor Fest held in September, thanks to a cash boost from the Lake District National Park’s Communities Fund.

The £3,000 donation made it possible for children to try out a range of outdoors activities, such as sailing, archery, indoor climbing, bushcraft skills and horsemanship.

Suzy Hankin, Area Ranger for the Lake District National Park, organised the funding for the project. Suzy said: “You’d be surprised by how many local children aren’t aware of the range of activities and experiences that are on their doorstep, so I was delighted to be able to connect with local outdoor providers and inspire the children about the National Park. This has proved a huge success, so we’re keen to find the next project to support with the Local Communities Fund.”

George Jackman, aged eight from Penruddock School took part in the Bushcraft Activities with Reach Beyond Adventure, said "I had a great afternoon in the woods. I started a fire with the firewood I'd collected, and baked some bread which I ate with some hot chocolate. It was better than any subject at school!"

The annual Ullswater Outdoor Fest organised by Ullswater Association takes place every year at the end of September and offers nine days of guided walks, outdoor adventures, films and talks celebrating the great outdoors and the Ullswater Valley in particular.

The school childrens’ activities were supported by businesses from the Ullswater Association, including Ullswater Yacht Club, Distant Horizons, Reach Beyond Adventure and Rookin House Centre. 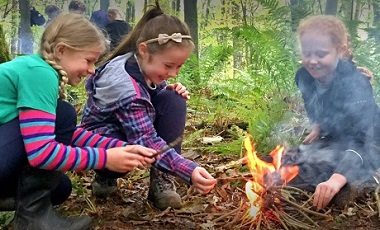 The Ullswater Valley Plan – What happened!?

The Ullswater Way has been a phenomenal triumph since its official launch in April 2016. The local community, landowners, businesses, partner organisations and volunteers have all been instrumental in its creation and its continuing success. The 20 mile route is now enhanced with an inspirational Heritage Trail, a series of installations from local artists and craftspeople, which celebrates an aspect of the Valley’s heritage.

Recently people counters have been installed at 2 sites on either side of the lake to monitor footfall and provide evidence of its continuing success.  Volunteers have been regularly downloading the data from the counters and during August over 11,000 people were estimated to have passed the sensor at Sandwick. 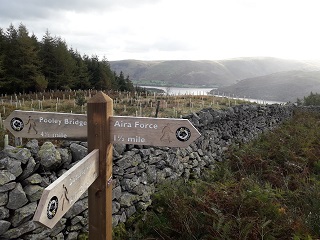 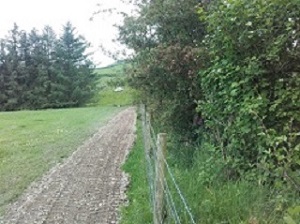 About the East Distinctive Area

The rugged and craggy high fells of Helvellyn, Fairfield and High Street are split by the two upland valleys of Ullswater and Haweswater / Lowther. Farmland fringes the north-eastern margin of the East area, which contrasts with the high fells.

The East distinctive area is predominantly rural and tranquil and has the lowest population of any of the distinctive areas. Glenridding / Patterdale is the largest settlement, with other smaller villages including Askham, Pooley Bridge and Penruddock.

Ullswater is one of the four navigable lakes in the National Park, whilst Haweswater is a reservoir providing water supplies for the North West of England.

Map of the East Distinctive Area 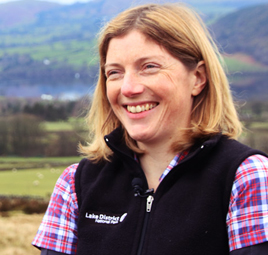 Suzy is the Area Ranger for the East Area of the Lake District. Please get in touch with Suzy if you have any queries or enquiries about our work in the East, potential projects or community fund applications.