What we're trying to achieve

[3.15.01] Our strategic approach to housing is strongly focused on making meaningful interventions to the housing market, for the good of communities and the economy. We want to achieve a balanced and resilient housing market with a high proportion of properties in permanent occupation, and a supply of new homes that meet people’s needs and maximises the delivery of affordable housing.

Based on the level of identified housing need we will make provision for a minimum of 1,200 new permanent homes between 2020 and 2035 to increase the supply of homes to meet local community need.

We will achieve this by supporting:

And by not supporting open market housing.

[3.15.11] The policy covers all new housing proposals including new build, the sub- division of existing houses, changes of use and the conversion of traditional buildings. This could be housing to meet the needs of our ageing population such as extra care housing, housing options to meet the acute affordable housing need in the area such as shared ownership and social rented or homes for rural workers. In the application of this policy, we will refer to the Affordable housing definition in Annex 2: Glossary of the National Planning Policy Framework.

[3.15.12] The housing figure is a target not a ceiling, and is based on the number of completions. This policy will be applied to all applications for new permanent homes. A new permanent home is a new dwellinghouse that should be occupied as someone’s only or principal home. All new homes approved will be the subject of planning controls to ensure the future use is for permanent occupation only. We will not permit new homes to be used as a second home or as a holiday let under this policy.

[3.15.13] Further guidance on the requirements for all new housing developments is provided in the Housing Supplementary Planning Document. For example, this includes details on local connection criteria, how eligibility is restricted to a geography and how planning controls will be applied.

[3.15.14] Proposals for new homes and subsequent planning controls will be tailored to local circumstances. There is no ‘one size fits all ’implementation of Policy 15, instead we will consider the functional characteristics of the proposed location whilst taking account of the broader policy context. For affordable housing we will also take into account information on these material considerations:

[3.15.15] On windfall sites and allocated sites capable of delivering more than five dwellings, the first five dwellings will be subject to a local occupancy condition and anything above that number will be on-site affordable housing reflecting the local community need.

[3.15.16] We are supportive of self-build and custom housebuilding as a mechanism for housing delivery, as well as private house builders, Registered Providers and Community Land Trusts.

[3.15.17] We do not apply a minimum density requirement to new housing development, but given the finite land supply we do expect new proposals to maximise the development opportunity. When assessing housing density, we will give careful consideration to the character and appearance of the locality, as well as having regard to the local housing need.

[3.15.18] We will have regard to ‘Planning policy for traveller sites’(DCLG August 2015) and the Gypsy and Traveller Accommodation Assessment when considering applications relating to the housing need of gypsies and travellers and travelling show people.

[3.15.19] Through Policy 18 we seek to retain and evolve a range of high quality holiday accommodation to ensure there is a wide selection of accommodation types available in the locality. For proposals seeking to change the use of a guest house to a permanent dwelling, the applicant will need to provide evidence to demonstrate that the proposal would not create a shortage of guest houses in the locality after undertaking an appropriate marketing exercise for a minimum of 12 months. We will apply an occupancy clause through a planning condition to the new dwelling ensuring it is used as a permanent dwelling and not as a second home or holiday let. For those proposals where the change of use of a guest house would result in more than one new house, the first would have a permanent occupancy clause and the rest would serve to contribute towards meeting the identified local need and would have a local occupancy clause.

[3.15.02] Our starting point when planning for housing is Government’s approach in National Parks (Circular 2010) which states that “the Parks are not suitable locations for unrestricted housing” and that the “expectation is that new housing will be focused on meeting affordable housing requirement, supporting local economy and key services.”

[3.15.03] There is immense pressure on the existing housing stock in many areas of the Lake District. This issue is due in part to those buying second homes or homes to be used for holiday letting purposes. Over 80 per cent of the existing housing stock is unfettered – houses without occupancy controls. According to the 2011 Census, 24 per cent of the housing stock in the Lake District has no permanent resident. However, from local surveying we know that in some Parishes much higher levels exist and it is generally accepted that if the percentage of second homes is more than 20 per cent then the sustainability of the settlement is affected.

[3.15.04] Earnings in many of our rural areas are lower than in neighbouring urban areas, due to a lack of large industry and greater levels of agriculture and tourism. This makes it difficult for people relying on local wages to compete for housing in an open market. The affordability ratio in the Lake District is shown in Figure 9.
Figure 6: Household income to house price ratio trend in the Lake District

[3.15.05] The population of the Lake District is decreasing, which is seen particularly in the proportion of working age population. However, the older population is increasing and the local demographic is becoming unbalanced. One of the greatest single challenges to sustaining vibrant communities in the Lake District is the availability of housing that a full cross-section of a balanced community should ordinarily be able to afford. The housing target for the delivery of new permanent homes has been derived following the consideration of identified local need and supply options. These include Strategic Housing Market Area Assessments and housing need studies, demographic forecasts, historic trend data on completions and proposed allocations of land.

[3.15.06] Individuals and households who need to live in a particular area of the Lake District are unable to find an available and suitable house for them or cannot afford one – and all too often, it is both. The impact has been most profound upon those of working age. Many households simply cannot secure a suitable house that is affordable for them in a location that meets their needs. Incomes from farming, for example, are typically below average earnings. If farm workers cannot afford to live close to their place of work, it risks the continuation of local farming practices and the ability to effectively operate a business is made more difficult.

[3.15.07] The popularity of the Lake District means there is high demand for housing, this drives prices up because there is a limited supply. Whilst new houses are being built all the time, demand outstrips supply and the Lake District’s environment simply cannot accommodate a level of growth that would be necessary to meet the demand that exists. Currently there are no national planning controls preventing existing unfettered properties from being sold as a second home or used as a holiday let.

[3.15.08] Many local people are being forced to move to another part of the county due to the lack of suitable, affordable housing. As a result, some local communities are shrinking or the demographic make-up is changing. The difficulty arises when most of one part of a community cannot afford to live in an area, so are replaced by a majority of just one other sector of a community. For example, if a high proportion of a community is retired, this can threaten local schools, makes it difficult for employers to recruit and limits the number of willing volunteers to run the locals clubs, societies, and act as First Responders.

[3.15.09] In some areas guest houses are proving very difficult to sell both as a business and as a dwelling. The main reason suggested for this is the occupancy restriction that would be imposed from the change of use. Lots of ‘For sale ’signs can have a detrimental visual effect on the built environment and perceived vibrancy of an area, as well as resulting in a lack of longer-term investment in the built fabric of the neighbourhood.

[3.15.10] It will be increasingly challenging to maintain a proportion of development on previously developed land, particularly given domestic gardens in built up areas are classed as greenfield, but we will seek to do this and we will monitor completion figures.

An affordable housing scheme of 15 dwellings was created on the site of a former kitchen garden in the centre of Grasmere village within the Conservation Area. Although traditional in form, the buildings have a modern design. The proposed dwellings have some traditional design elements, such as local slated pitched roof and overhanging eaves; and also exhibit modern detailing including zinc flat roof dormers, timber panelled window surrounds, and larger amounts of glazing. 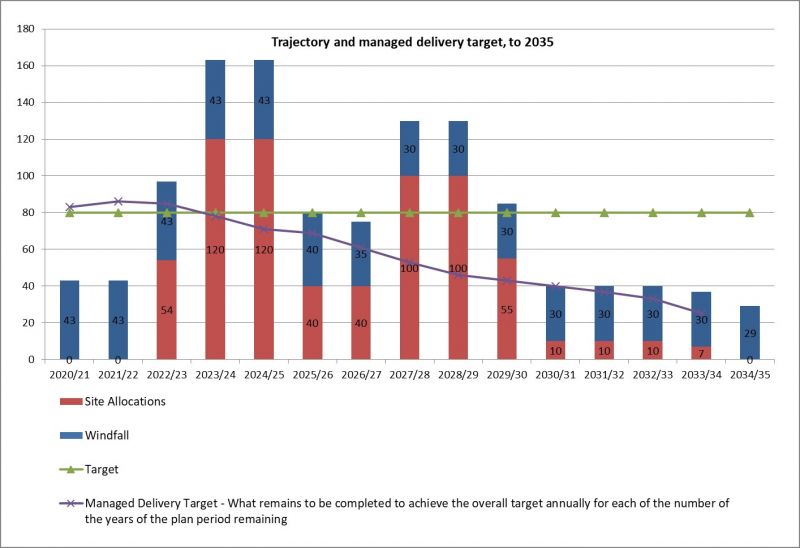