Bassenthwaite Lake is home to an amazing variety of wildlife, including its world famous ospreys and vendace fish from the Ice Age. But this National Nature Reserve is under threat. Water quality is poor and polluted, seriously affecting the wildlife. We need to manage the land because what goes onto the land goes into the lake.

You can visit Dubwath Silver Meadows Nature Reserve at the north end of Bassenthwaite Lake to see a range of wildlife that has benefited from the restoration proejct.

The Bassenthwaite catchment is the land that feeds into the lake

Catchment refers to the area which feeds its water into Bassenthwaite. This 350 square kilometre area stretches as far as Borrowdale, Thirlmere and Troutbeck near Keswick.

These threats are particularly acute because the lake is relatively shallow, being only 19 metres at its deepest point.

Solid particles are washed into a river or stream, where they will be carried in the water until the flow becomes slow and weak enough for it to settle – for example, when rivers flow into still waters such as Bassenthwaite Lake.

The rate of sediment accumulation on the bed of Bassenthwaite Lake has doubled over the past 100 years. Lake sediments are also disturbed and recirculated during storms, especially in the winter. This clogs up the clean gravels where the vendace spawn.

This erosion dates back many thousands of years. Intensive grazing in the high fells has damaged vegetation and increased soil erosion. More than half of the land in the catchment is used for open fell grazing on steep, high slopes. There has also been a reduction in tree cover. The fine sediment eroded from the soil is washed down the slopes where it settles in waters like Bassenthwaite Lake.

The Lake District has many heavily modified watercourses in its valleys, and the Bassenthwaite catchment is no exception. Building embankments disconnects rivers from their natural flood plain, so that fine sediments then remain in the river channels. Straightening out meandering streams and rivers also speeds up the flow of water, meaning that sediment is carried quickly and efficiently and only settles when it reaches slower waters such as Bassenthwaite Lake.

Mine waste such as spoil heaps, is a source of sediment. It is a less significant factor than other forms of erosion but places such as Force Crag Mine at Coledale Beck, and Goldscope and Yewthwaite Mines in Newlands Valley do affect Bassenthwaite. Erosion makes mine waste less stable over time, and climate change could bring more intense rainfall in the future which would also increase erosion of sediment.

Each litre of water arriving in Bassenthwaite Lake contains 25 microgrammes of phosphorus - it needs to be reduced to 15.

Washing machines, dishwashers, increased population and visitor numbers all contribute to the enrichment on the lake by increased nutrients - such as phosphates which in turn stimulate greater than normal growth of algae.

Since 1995 the local sewage works has had a stripping plant, but the build up of chemicals in the lake bed over the years is still a problem, especially for the rare fish the vendace.

High nutrient levels combined with still conditions in the summer can result in dense growth of algae. This can collect at the lake edge. At such times, signs are placed at access points to make people aware of this possibility, and local farmers and outdoor centres are contacted to warn of the problem. 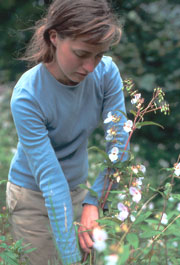 This species tends to grow in damp areas. This annual is becoming a real problem on the River Derwent from Borrowdale to Bassenthwaite Lake.

An elegant, tall and very attractive plant, the balsam crowds out other native species and also scatters thousands of seeds - a single plant can spread over 6,000 seeds.

Once the seeds for the following year have been spread, the plant dies back over the winter. Having crowded out native grasses it then leaves bare soil, which makes riverbanks or lake shores very prone to erosion in winter storms. 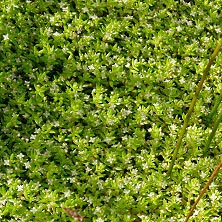 This plant is threatening the Lake District's wildlife, especially Luronium natans. It's a tough invader, which grows all year and out-competes our native plants.

It grows rampantly on damp ground, lakeshores, and in shallow and deep water. New Zealand pigmyweed is very hard to kill and just a 1 cm piece can grow to dominate a wetland.

Because New Zealand pigmyweed can be spread by footwear, fishing tackle, boat propellers and boat trailers precautions need to be taken to stop its spread.

It is essential lake users remove any plants or plant remains from equipment before leaving the lake.