Stanley Ghyll is now open again after a major project to bring back its natural wildlife and its view.

Stanley Ghyll is “one of the finest waterfall ravines in the Lake District”. The humid, sheltered conditions within the Site of Special Scientific Interest (SSSI) protect a rich community of mosses, lichen, liverwort and notable rare ferns. The Beck, the waterfall and adjacent woodlands form the most important habitat for these plants in southwest Lakeland. Moreover, the awe-inspiring landscape and unusual biodiversity motivated exploration en-masse and Stanley Ghyll became a popular destination for tourism and artistic endeavour in the late Georgian and early Victorian eras.

The site was purchased by the Lake District Special Planning Board (which later became the Lake District National Park Authority) from the Ponsonby and Dalegarth Estate in 1994, with the object of preserving nature conservation interests and providing access opportunities for the public. From various historical documents and drawings we know that prior to the 1850s, rhododendron did not exist on the property. Bare granite and native species dominated the landscape and the waterfalls could be viewed and heard from a great distance.

About this time, the property served as a nursery for the gardens of Muncaster Castle and the Victorian fascination with rhododendron saw the planting of many different species throughout the site in the spring of 1857. The common, invasive ponticum variety thrived in the steep sided ravine of Stanley Ghyll and in less than one hundred years, the property was a sprawling mass of densely packed, unchecked rhododendron growth; poisoning the soils, shutting out the light and the views and preventing the natural progression of the native species. 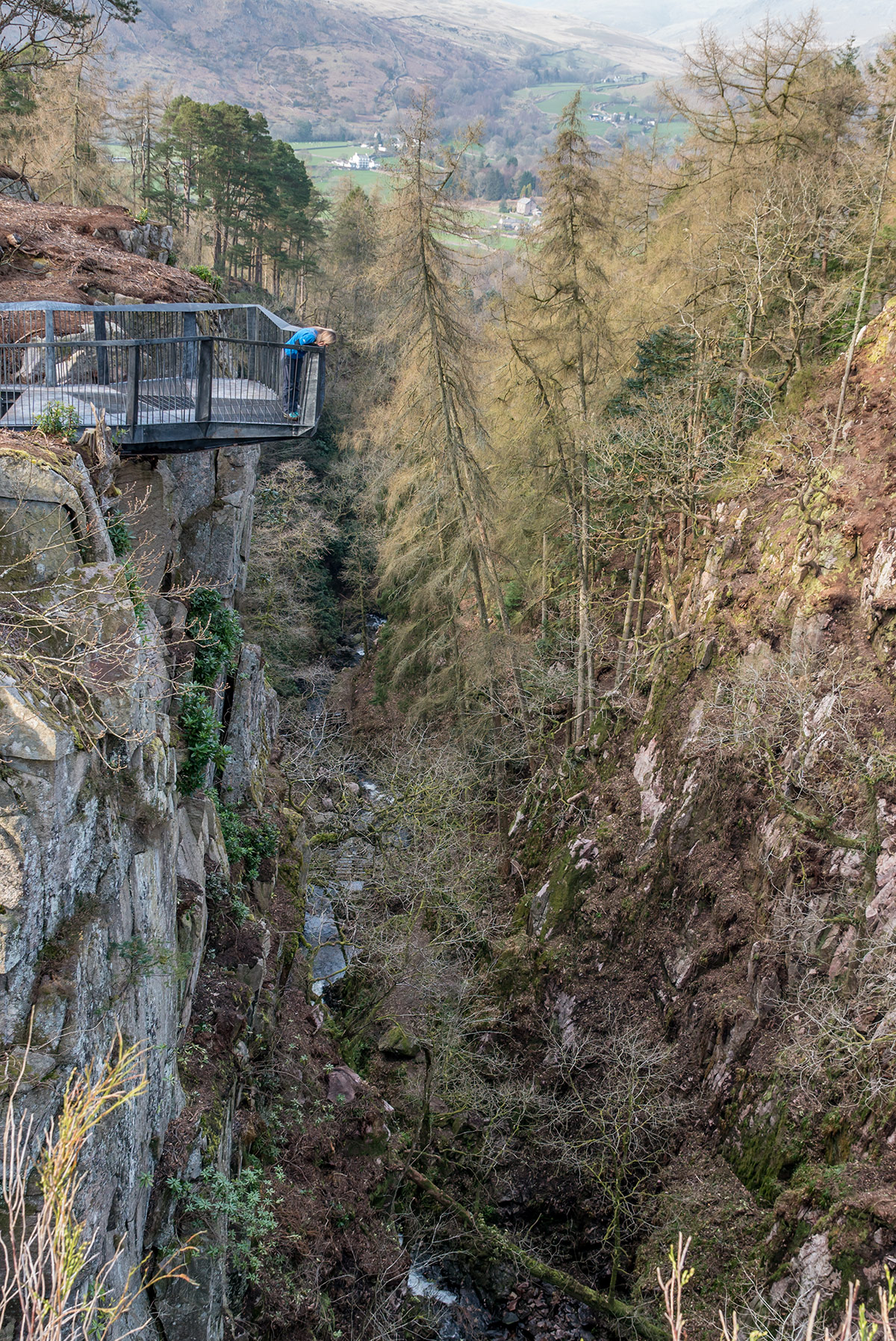 In 2019, we worked with volunteers and specialist contractors to begin removing two hectares of the invasive rhododendron to allow the native woodland to regenerate. As well as opening up the views to the waterfall, we also discovered a number of rock faces and trees across the site, and directly above the footpath, that had become unsafe. Rhododendron ‘root jacks’ rock, rendering it loose and unstable and obscures fallen or dangerous trees. Unable to make the site safe for the public at that time we closed a section of footpath from the third footbridge to the waterfalls. Specialist engineers identified that area - directly above the waterfall, viewing area and footpath - as a hazardous rock face, with imminent danger of rockfall.

To make the whole property safe, and to bring the SSSI back into good condition, since December 2020, the National Park Authority has removed around seven hectares of invasive rhododendron to make the very most of this iconic view. This specialist work was carried out by our rope access contactors, Lake District National Park rangers and a team of dedicated LDNPA volunteers. There has been a dramatic, tangible transformation in just a short space of time and long-term, the environmental and aesthetic improvements will be immense.

In terms of making the site safe for the public immediately, as mentioned, a section of footpath was closed temporarily. We have been working to stabilise most of the rock faces within the gorge, and are now able to re-open most of the site. Unfortunately, in April 2021, rock falls just above the final bridge badly damaged the narrow path between the bridge and lower falls. This has made the path unstable and unsafe and unfortunately, for public safety reasons, we will have to keep this path closed temporarily. Because of the loose soil and sloping bedrock, it is not going to be easy to rebuild this small section of path – and we are investigating the quickest and best way of doing this.

The map below shows the extent of the footpath closure. All the other rights of way in Stanley Ghyll are open for use, and to help people see the stunning view safely, from today, a Victorian-inspired cantilevered viewing station is now open to the public.

For your own safety please do not try to cross the fencing to access this land. 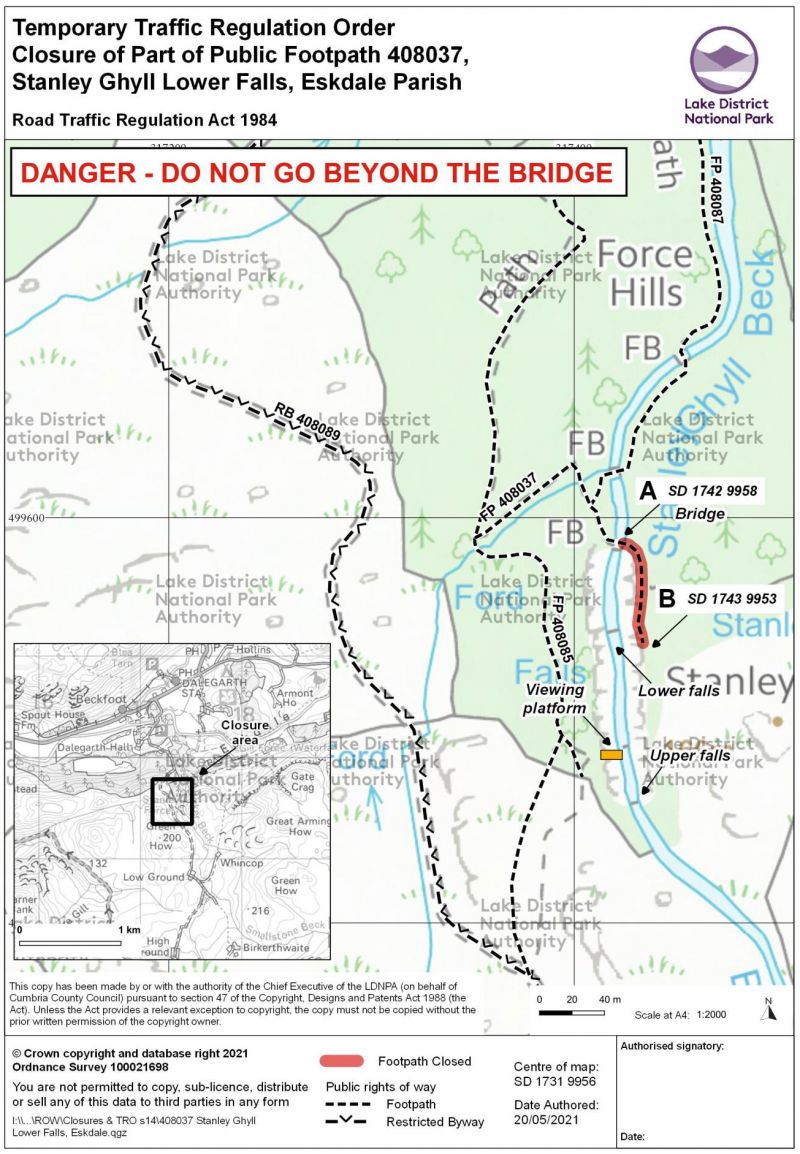 The map shows the temporary closure of the footpath.

The site is now well on its way to much improved biodiversity. Eliminating the dense rhododendron canopy will encourage the growth of native vegetation which will transform the site with birdsong and light.

In addition, the exciting planning application for a proposed Victorian-esque, metalwork viewing station on the upper crest of the ravine was approved by Development Control Committee on 2 December 2020. 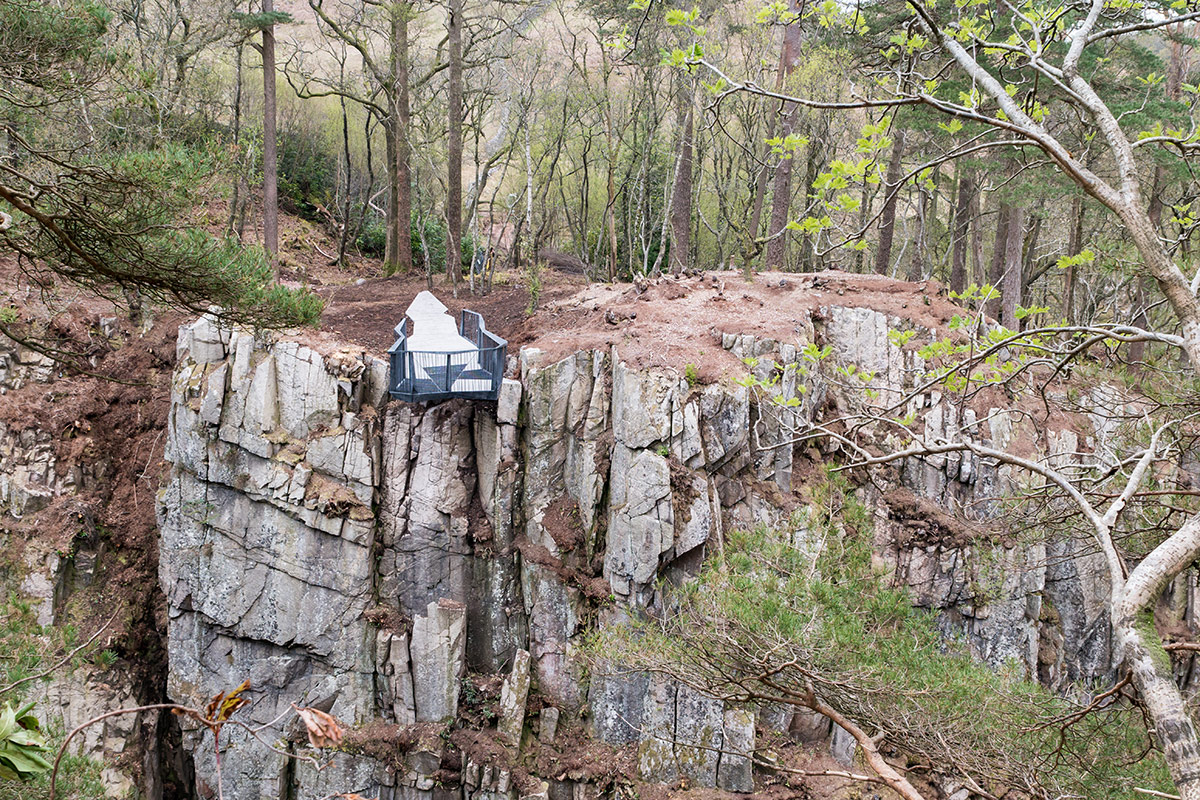 The viewing station, funded by a grant from the Rural Development Programme for England, is now in situ and provides unparalleled views of the upper reaches of the historic Eskdale Valley and Scafell Massif, an open view of the upper, middles and lower falls, previously hidden from the human eye by rhododendron for over 100 years, and the breath-taking opportunity to safely ‘walk out’ over the 150 foot ravine. Since the clearance of the rhododendron last year, people have wanted to get to the crest edge to get a better view and experience that sense of impending danger, just without the corresponding safety net! People will always be drawn to cliff edges to get a better view, and the viewing station will enable this to happen in a safe and thrilling fashion. It is hoped that the viewing station will create ‘safe excitement’ within the ghyll and provide an exhilarating yet aesthetically subtle addition to the current visitor attraction of Stanley Ghyll.

Thank you for your patience during this necessary health and safety work. If you have any questions, please contact Adam Phillips, Area Ranger: adam.phillips@lakedistrict.gov.uk

Further information about the SSSI site designation is in the Natural England Citation (pdf).

A grant to support a project to design, manufacture and install an ironwork viewing platform, side railing and 20 metres of specialist stone pitching along the riverside footpath at Stanley Ghyll. It is part funded by the European Agricultural Fund for Rural Development.

Supported by the Cumbrian Fells and Dales Local Action Group.