What are we trying to achieve?

What is the challenge and why are we trying to address it?

Globally and nationally the response to addressing climate change has not been adequate. Global warming reached 1°C in 2017, and the Intergovernmental Panel on Climate Change (IPCC) assesses that it is likely to reach 1.5°C between 2030 and 2052 if it continues to increase at the current rate. This means if global greenhouse gas emissions continue to be released on the current trajectory resulting in more global warming, the scale of change expected through to 2080 in the Lake District is going to be significant. Climate change is therefore a universal pressure on and threat to the Lake District, its environment, economy and communities.

In recent years the Lake District has experienced a number of storm and flooding events creating significant damage. Storm Desmond caused catastrophic damage on the 5th December 2015 and we are still recovering five years on. The new ‘Pooley Bridge’  has only just been built and the Keswick to Threlkeld multi-user trail opened on the fifth anniversary of the storm. But it is not just storm and flood events, as warmer drier summers are likely to bring their own issues such as more frequent droughts, wildfires, and inhospitable climates to habitats and species. We have updated the Climate Change Adaptation Report for the Lake District this shows that climate change will impact the special qualities and outstanding universal value of the Lake District, and our experiences of living, working and visiting the area.

We have prepared a Climate Change Adaptation Report which predicts, using the latest Met Office Data (UCKP18), what climate change means for the Lake District in a worst case scenario. Based on this evidence if we do nothing, the future looks stark. 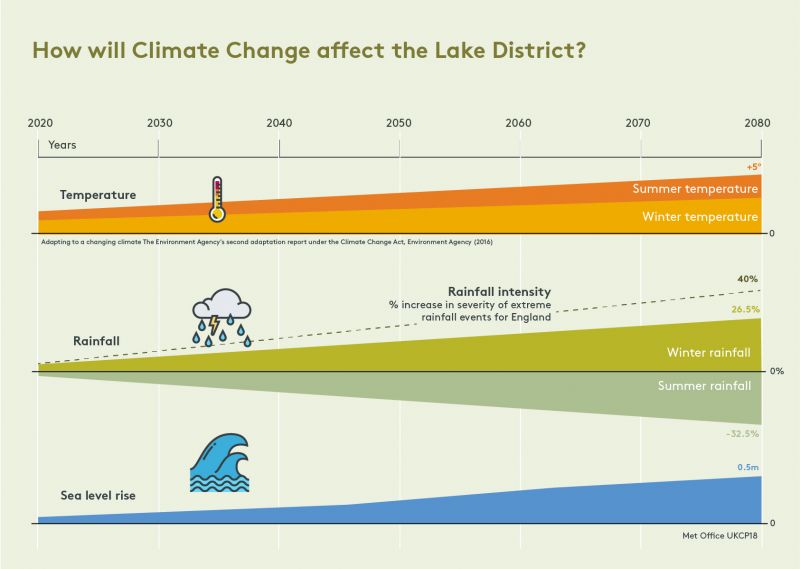 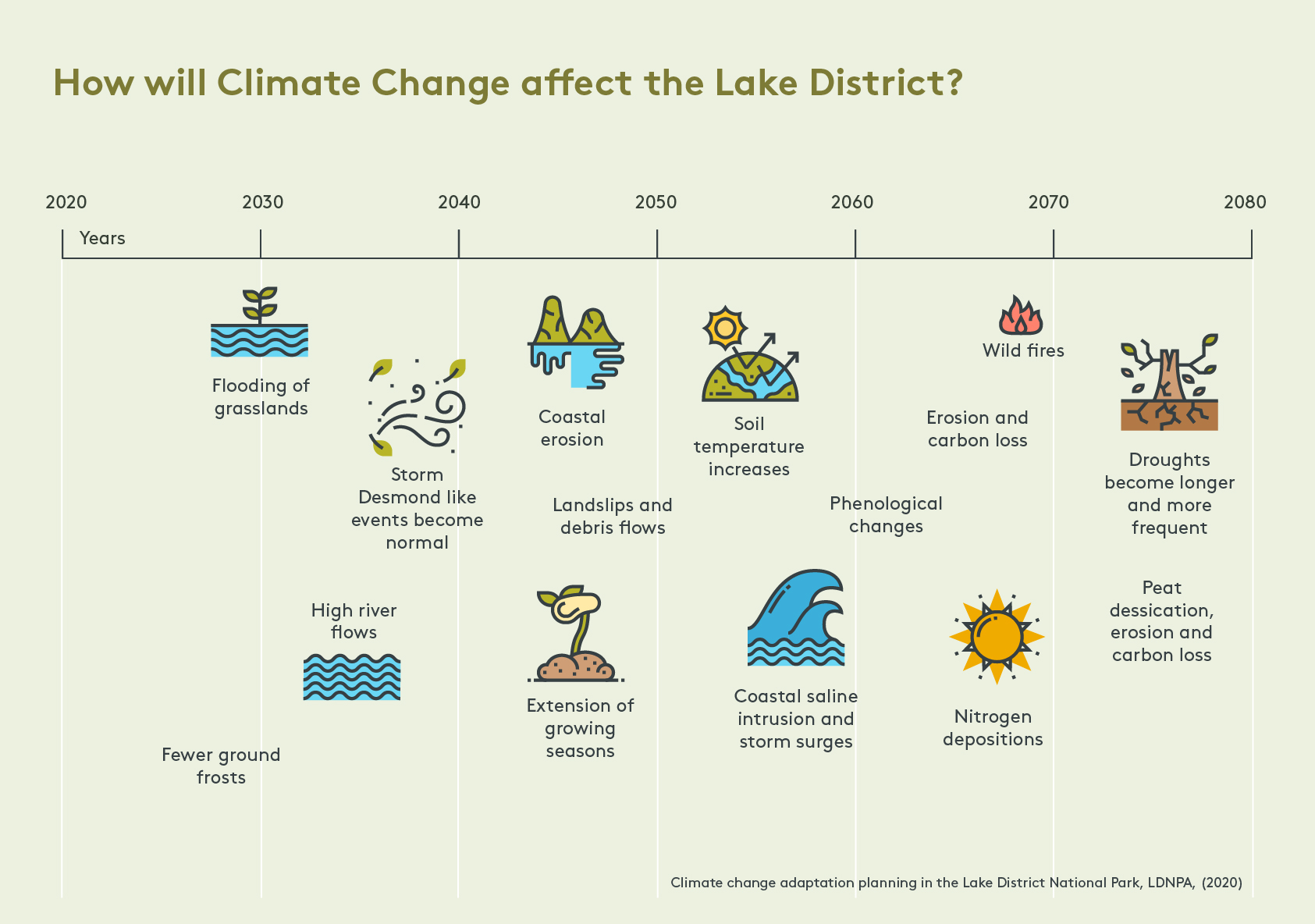 The UK Government passed laws in 2019 to end its contribution to global warming by 2050. This means the UK will be required to bring all greenhouse gas emissions to net zero by 2050. In December 2020, the UK Government also set a new Ten Point Plan which aims for at least 68% reduction in greenhouse gas emissions by the end of the decade, compared to 1990 levels. In April 2021, the UK Government substantially increased its commitment by setting a new target of 78% carbon emission reduction by 2035. This Plan sits well within the context of this new target.

As a Partnership, we must therefore act now through this Plan to contribute to delivering major and rapid reductions in greenhouse gas emissions, and we have a good starting point to lead the way in supporting Government to achieve this ambitious target, with over 10 years’ experience reporting against a carbon budget and reducing carbon emissions through the Low Carbon Lake District project.

The Zero Carbon Cumbria Partnership have prepared a Cumbria Baseline Report proposing how to reduce greenhouse gases in Cumbria by breaking down carbon savings required sector by sector. From this a Lake District baseline has been created which is reported in the Climate Action and Net Zero supporting paper which suggests an ambitious trajectory to reach net zero by 2037. The value of this report sets out the scale of the challenge. We want to support the global goal of limiting climate change to within 1.5oC of warming – to prevent the worst of its impacts. Achieving net zero by 2037 in Cumbria, will be our contribution to this.

The Glover Review discusses how National Parks should be leading climate action to address the impacts of climate change and recommends that National Park Management Plans should set out clear priorities for responding to climate change. It quotes the Committee on Climate Change saying

"significant changes to land use are needed now and over the next 80 years to move the sector towards achieving net zero greenhouse gas emissions, while protecting natural capital that the land currently represents and which will otherwise degrade as the climate changes.”

The evidence, in the Climate Action and Net Zero supporting paper demonstrates the challenges for the Lake District resulting from climate change:

The impact of restrictions imposed in response to the Covid-19 pandemic has created a large scale economic impact on society bringing much hardship to businesses and people. However, the annual emissions (nationally) are expected to be down by 6-8%, in 2020, close to the target of 7.6% that is required every year between 2020 and 2030 to keep global warming below 1.5°C.

It is important recovery packages from covid-19 ensures and supports the decoupling of economic growth from greenhouse gas emissions to achieve future reductions to net zero. In doing so, we want to create the conditions to support sustainable growth of the Lake District economy and communities. We also want to unlock funding and opportunities to make the changes that are needed to grow world class visitor experiences; and at the same time balance this with the Vision for the National Park.

Due to the threat of climate change to the Lake District environment, communities and economy the Partnership have agreed that climate action and adaptation is a key priority. Our approach is both to lead climate change adaptation and action to prevent the worst case scenario and longer term impacts which would be devastating.

To mobilise climate action, the Partnership agreed that we need to identify clear and deliverable actions to reduce emissions. Our approach is to do all we can to adapt to climate change and to reduce emissions as our contribution to the global effort to prevent a worst case scenario and avoid its longer term impacts.

We have identified a fifth of the savings needed over the next 5 years to put us on a 2037 net zero trajectory through actions integrated into the Future of farming, nature and climate change, Sustainable travel and transport and Vibrant communities and a prosperous economy sections in the plan. Whilst the remaining gap between our current carbon emissions and net zero does look overwhelming, the Partnership is at the forefront of understanding our carbon budget in the Lake District and have identified the carbon savings of deliverable projects which help address that gap. Whilst ambitious and challenging, we believe the carbon savings identified are deliverable and play to the strengths, knowledge and influence of the Partnership. It is clear that reducing this figure to zero is a major challenge, and that the bulk of the reduction must come from the vigorous implementation of appropriate policies at the national level. Nevertheless, we are committed to urgently developing further actions that we as a Partnership could take over the lifetime of the Plan to help close the gap further, including investment and work at a county level with partners through the Zero Carbon Cumbria Partnership to support Cumbria to achieve net zero by 2037.

The proposal for Cumbria to aspire to be net zero by 2037 is included in the Cumbria Recovery Strategy (consultation draft). This Strategy is led by the Strategic Coordination Recovery Group (made of the county’s decision making bodies). This group is now considering the responses received on that consultation and a final decision is expected in Summer 2021. Delivery will be through the work of the Zero Carbon Cumbria programme.

From evidence gathered in the Climate Action and Net Zero supporting paper we know that to reduce the required amount of carbon to remain on a trajectory towards net zero, between now and 2025, we need to reduce carbon emissions by approximately 860,000 tCO2e:

By identifying the scale of the national and global challenge and working together across the County with the Zero Carbon Cumbria Partnership, we believe there are significant opportunities to close this gap and have committed to developing further local actions over the lifetime of the Plan. Closing the large gap that remains will also depend in large part on policies at the national level which are beyond the control of the Partnership.

Our actions for climate change adaptation that contribute to net zero are integrated through the sections on the other key challenges. They include actions to reduce risks from flooding and drought and to support vulnerable communities to build resilience.

Actions to reduce carbon from transport, through land management and by working with businesses are also in those sections of the plan. Combined these add up to reducing a fifth of the savings needed over the next 5 years.

Additionally, to support the reductions and work towards closing the gap we have developed the actions in the list below. Partners will need to allocate resources, and further funding will need to be secured to deliver these actions.

Some of these activities may last the length of this Plan or longer, while others will be delivered sooner. They may change throughout the Plan period as we need to be agile and respond to changing situations and changing knowledge.

More information can be found in the research framework such as carbon budgets for land management in the Forestry, farming, nature and climate section 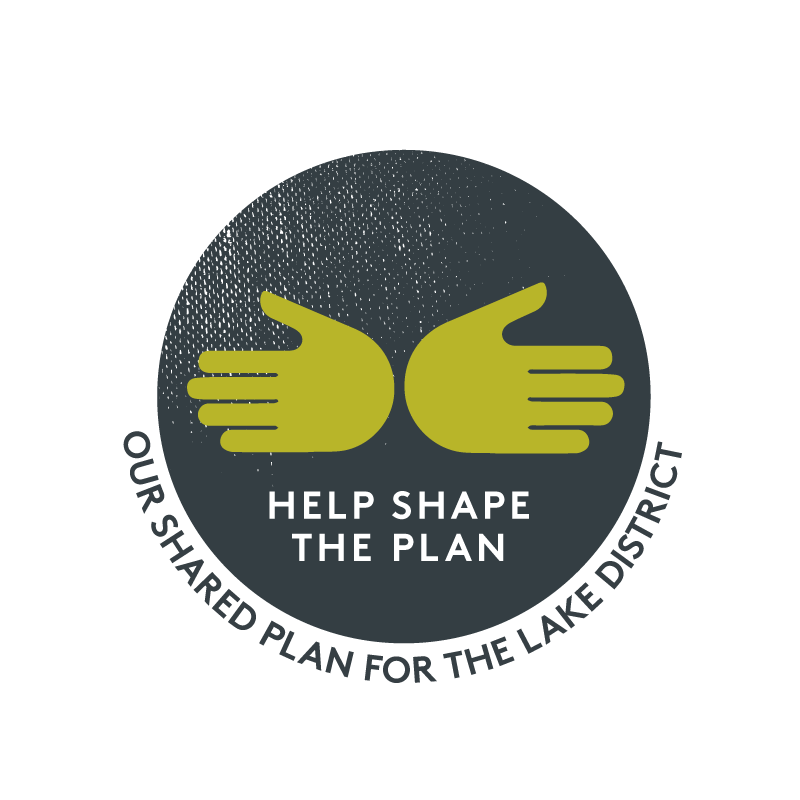 Thank you for sharing your views

This consultation closed at midday Wednesday 23 June 2021, thank you to everyone who gave their views.

The Partnership are now analysing the responses and will update the Plan for adoption later in the year.

The other key challenges

This challenge does not operate in isolation, you may also be interested the four other key challenges:

Future of farming and forestry, nature recovery and climate change

A Lake District for everyone