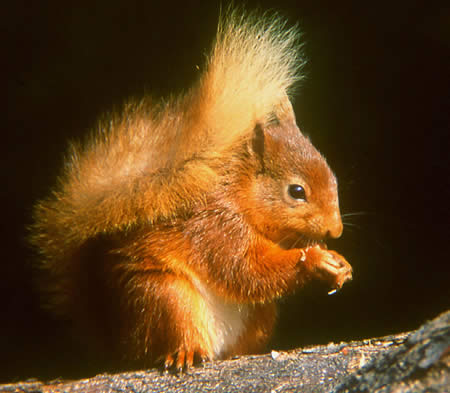 This photo shows the red squirrel (sciurus vulgaris), native to the woodlands of the Lake District and one of the few remaining areas of the country where this animal can still be found in the wild. Red squirrels are endangered species which have been suffering a steady decline in numbers for the last 100 years, ever since the grey squirrel arrived in Britain from North America. Reds are smaller and more timid than greys and appear to be being out-competed by their larger cousins.

Although the grey squirrels are increasing their populations in South Cumbria, and to a lesser extent North Cumbria, there are still large numbers of red squirrels within northern areas of the National Park. When faced with competition from grey squirrels the reds survive best in large blocks of coniferous woodland. They need a consistent and diverse food supply consisting of tree seeds, nuts, berries, cones, buds, shoots, flowers, lichen, fungi and occasionally insects. The autumn and winter seed harvest is important for surviving the winter and for breeding successfully the following year. Squirrels do not hibernate, they need to eat all year round to survive. Between April and August the natural food supplies of a red squirrel are at their lowest, consequently as many as 5 out of 6 young red squirrels may die in their first year.

A red squirrel may be 180-240mm long with a tail of up to 175mm. They use their tails to keep warm in their nests during winter, to aid their balance and for communication. They are active during the daytime and make their nests, or dreys, of twigs in a tree fork or a hollow. They line their nests with soft hair, moss and dried grass. During mating chases, several males may follow a female in spectacular leaps through the tree canopy. Females may have one or two litters a year, usually of about 2-3 young.

Why do animals and plants need protecting?

What are the main threats to red squirrels?

What efforts can be made to protect and conserve the red squirrel population?

Where do they bury their nuts?

Why do they have such long tails?

What might the food chain of a red squirrel be?

Discuss the wildlife of the Lake District National Park.

Why aren’t red squirrels seen all over the UK?