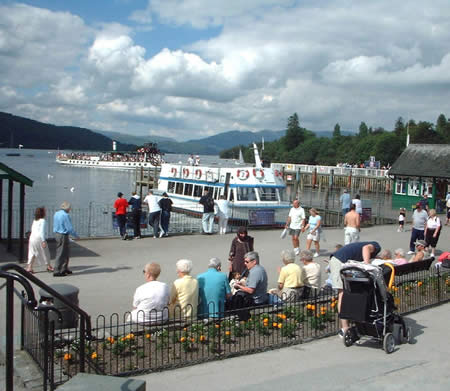 This photo is taken at Bowness Bay on the shores of Windermere lake. The fells in the background are the Langdales.

Windermere Lake Cruises (opens in new window) are the 16th most popular tourist attraction in the UK and the most popular attraction in the Lake District, with over 1,000,000 people using them each year. They take visitors up to the head of the lake as far as Waterhead, near Ambleside and down to Lakeside at the southern end.

The 17km length of Windermere make it England’s longest lake and it has its own rangers and patrol boats in the busy summer months. There is a 10mph speed limit which came into force in 2005 to enable smaller vessels such as sailing boats and kayaks to enjoy the lake safely, unhampered by the jetskis, water skiers and fast motor boats. However this decision was a controversial one; and many local businesses had to diversify in order to continue trading. Tourists in general bring jobs and money into the area but increase traffic congestion and have a significant environmental impact.

The Lake District National Park was formed in 1951 but the idea of an area for all to enjoy and have access to began long before. William Wordsworth, the poet who wrote ‘The Prelude’ and ‘I wandered lonely as a cloud’, along with other famous Lakeland characters such as John Ruskin, the art critic and social reformer, all thought that this area of outstanding beauty should be protected for everyone to enjoy in the future.

The railway from Kendal to Windermere that was completed in 1847 improved access for many, but it was the advent of the motorised vehicle which brought the high visitor numbers, firstly the charabancs of the early 1900s and latterly the private car. Initially it was only the local factory workers who would visit from the surrounding counties on their days off, but now visitors from the southeast of England outnumber those from any other region and many people come from overseas too.

Current surveys show that 15.8 million visitors come to the Lake District each year. Most come to enjoy the scenery, peace and quiet and walking but many others visit specific attractions or take part in an outdoor activity. They stay in a mixture of self-catering and serviced accommodation. The National Park Authority's current challenge is finding ways of encouraging sustainable tourism without further damaging the very landscape which visitors come to enjoy.

Lakeshore erosion is a continuing problem around Windermere. Tourists and locals alike enjoy walking by the lakeshore but it destroys plant life and leads to erosion of the area. Soil gets washed away and then only a stony beach remains rather than a natural area of reeds, and water-loving plants. Some sections of lakeshore have been cordoned off to allow regrowth of natural lakeshore habitats. Many studies have been conducted on the ecology of the lake, and other measures have been taken to reduce pollutant levels in the water to encourage plant and fish life.