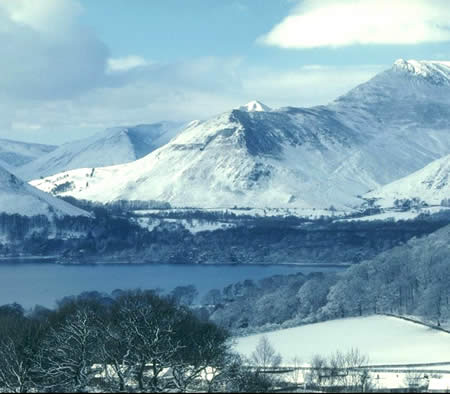 This photo shows a wintry scene in Derwentwater and the Western Fells with Causey Pike looming to the right in the background. It looks across the lake from Falcon Crag, with mixed deciduous woodland in the foreground areas.

The Lake District's closeness to the sea means that it has milder winters and cooler summers than other northern areas of England. The sea warms up and cools down more slowly than the land as the seasons change, thus moderating the land temperatures. In the valleys of the Lake District there are about 20 days per year when snow falls, however this can increase to as much as 67 days per year on top of a mountain such as Helvellyn. The general rule to follow is that as the temperature falls by 1degree C per 100m above sea level, so the number of snow-covered days increases by about 5 per 100 metres. Keswick is the town situated at the north end of Derwentwater, it has an average daily temperature of 4.7 degree C in December which rises to 15 degree C in July.

Some general figures for average weather in the Lake District are 200 wet days/year; 145 dry days/year; 20 snowy days/year. However the weather on the fell tops will never be predictable and will always be ‘worse’ due to the relief rainfall caused by the height of the fells and the chill factor caused by the wind. Seathwaite in Borrowdale is England’s wettest inhabited place receiving 3300mm per year.

There is a local Weatherline forecast that people can use. We employ fell top assessors to climb the Helvellyn mountain every day to record the prevailing weather conditions.

For walking and climbing in wintry conditions you need the correct clothing and equipment such as waterproofs, boots, ice axes, crampons, kisus (bivouac shelters), spare clothing, spare food and water. There are volunteer Mountain Rescue teams which are contacted through a rescue post or a 999 call to the police.

Hill sheep are able to withstand snow and cold but lowland sheep may have extra food put out for them. Cows are generally overwintered in barns between October and May since their pasture fields get waterlogged and the soil eroded due to trampling and the non-growth of grass during winter. This enables them to be better fed (silage or hay and cattle cake) and protected from the worst of the weather.

Would the lake freeze, how cold would it need to be?

Where are the animals, what would they be eating?

Why do some areas have more snow than others?

Where does the snow go when it melts?

How different would the weather be at the top of a mountain from the valley floor?

Where are the skiers? Compare Lake District snow with other mountain areas. Look at the Mountain Landscape page for useful links

Talk about the Mountain Rescue teams.

What do wild animals do in winter?

All links open in a new window: