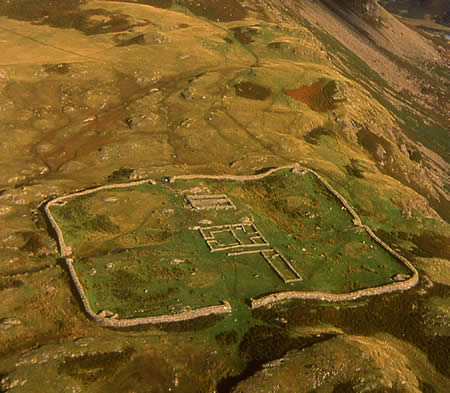 This photo shows Hardknott fort, the best preserved Roman fort in Cumbria south of Hadrian’s wall. It is a 3 acre stone fort  designed for 500 infantry soldiers. It was built beside the passing Roman Road which originally stretched from the west coast across the Hardknott and Wrynose passes to Windermere and beyond.

Hardknott sits at 260m above sea level, projecting southwest from the mass of Hardknott Fell. The fort was built in the second century AD under the Roman Emperor Hadrian. Its primary role was the guarding, policing and patrol of the road, defending it from invasion by Scots and Brigantes. It is believed to have been destroyed by local tribesman around 197AD and therefore was only used for a relatively short time compared to its sister forts at Ravenglass and Ambleside, which were occupied until well into the 4th century.

It has now been partly rebuilt from fallen masonry so that distinct areas are still visible: the commandant’s house; HQ; a pair of granaries within the fort; and then the external bath house. The fort gave access to vantage points over the Eskdale valley from the mountains down to the sea. Blocks of Cumberland red sandstone lying around the site must have been brought to the fort from outcrops on the coast. Out of the photo to the right is the best preserved Roman parade ground in Britain. It is slightly larger in area than the fort and was artificially levelled and embanked below the mountain.

There is evidence of human settlement in the Lake District even before the Romans. Following the end of the Ice Age about 10,000 years ago, Stone Age people in the Neolithic period arrived on the shores of the Lake District and began to clear woodland. They farmed, hunted and fished from dugout canoes and made their stone axe heads in the high fells.

Thousands of years later, the Romans built forts on high ridges to protect their trade routes whereas the Norse invaders who arrived around the 10th century AD were the first people to truly settle in the valleys and clear them. They built the first villages and brought Herdwick sheep with them.

Many of the Lake District names still used today originate from these times for example: dale (valley), gill (gorge), beck (stream), tarn (lake) and thwaite (clearing). Once trees had been cleared, charcoal was made and then used as a fuel to make iron in Furness, copper in Borrowdale and Coniston and lead in Glenridding.

Why would the Romans have wanted to settle in such a remote place?

What facilities would the Romans have needed at the fort?

Who made all the tracks?

Can you tell which way people walk into the fort?

Where would stone for the fort have come from?

Where is the water? No one can survive without it.

Draw a plan of your school, like this fort, looking from above.