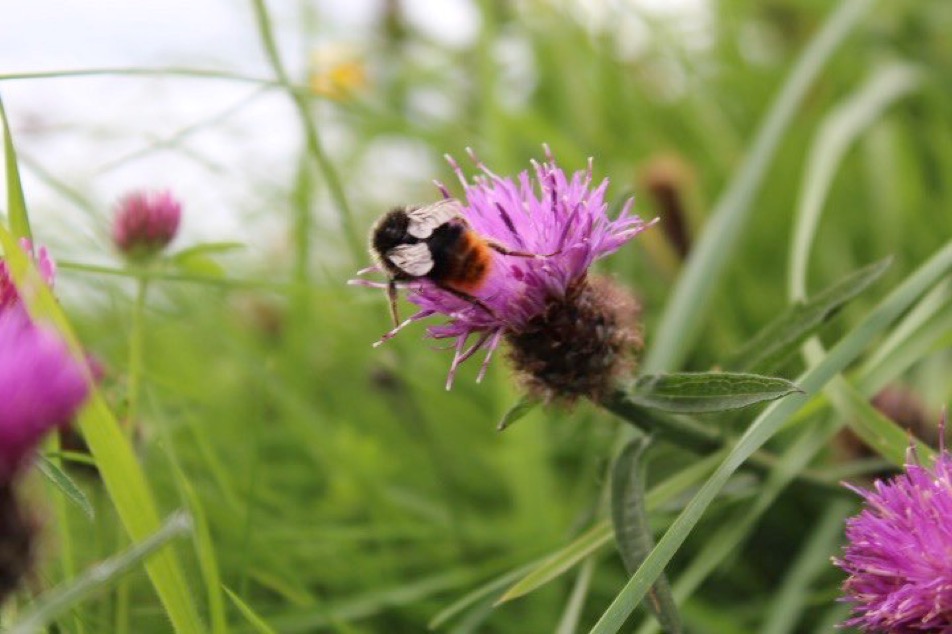 "This is a land which has supported continuous human settlement from the end of the last Ice Age. For the last 1,000 years a distinctive form of agro-pastoral agriculture has shaped the present day English Lake District. It continues to do so, creating and sustaining a landscape of great and harmonious beauty. This system of agriculture, based on the rearing of traditional hardy breeds of sheep long habituated to the Lake District, is adapted to the environmental constraints of its mountain setting. In the valley bottom, lush pasture fields and hay meadows (inbye) are overlooked by fields carved from the surrounding slopes (intakes) and open pastures on the higher fells which are grazed communally."
From the nomination of the English Lake District for inscription on the World Heritage List.

Traditional farming and wildlife have coexisted for around 1,000 years in the Lake District. Traditional hay meadows in the valley bottoms provided not only a source of winter feed for farm animals but also a habitat for wildlife such as bees, butterflies, hares, adders and voles. Birds of prey nested in the woodlands on the valley sides and swooped over to meadows to find food to feed themselves and their young.

Grazing livestock are crucial to the annual cycle of a meadow. The animals graze and fertilize the meadow during the winter months, the action of their feet helping the seeds from the previous summer to embed themselves within the soil and germinate.

During and after the Second World War the government encouraged food productivity above all else to feed the nation, and farmers were encouraged to plough up meadows. Between 1930 and 1985 97% of flower rich hay meadows in the UK were lost. Thankfully many meadows in Cumbria have survived to this day, due to their thin soils and inaccessibility for farm machinery. Cumbria has 10% of all the UKs hay meadows, and a walk around Bretherdale or Westmorland Borrowdale in the east of the county will show an abundance of orchids and wild flowers in the meadows in June and July. 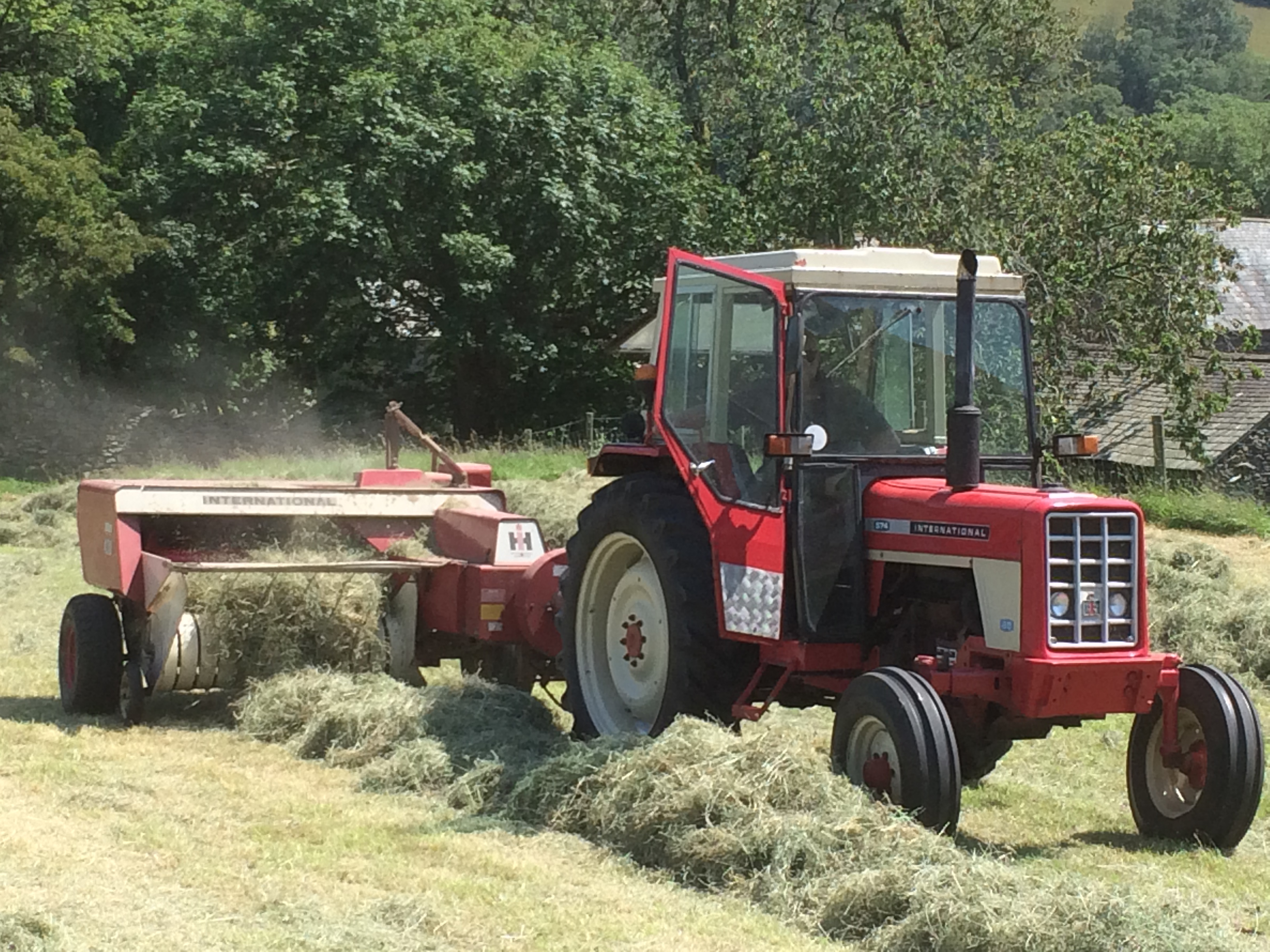 There are currently a range of environmental schemes that farmers are encouraged to enter into to enhance biodiversity in the Lake District. Cumbria Wildlife Trust has been working in partnership with the farming and wider community to restore 110 hectares of hay meadows in the county. Current options to enhance the environment include creating riparian strips for wildlife around watercourses, taking small areas out of grazing/ production, providing owl boxes and peatland restoration.

Woodland management schemes on farms provide safe havens for a growing population of red squirrels, and it is common to see red and roe deer grazing on farmland in the valley bottoms in the evening. In autumn the red deer in the Rusland Valley congregate for their ‘rut’ every evening and the noise echoes around the valley sides. This herd has been living here continually since the time of Henry VIII. Rusland, Dale Park and Grizedale are also home to a population of successfully reintroduced red kites.

Thousands of trees have been planted on many farms and commons in recent years. Planting trees upstream of areas that are known to flood can slow the progress of water through the landscape and reduce the risk of landslides following a serious flooding event such as Storm Desmond in 2015. Tree planting is also a great way to sequester carbon emissions. Through the process of photosynthesis trees absorb carbon dioxide to produce oxygen and wood.

Grazed wood pasture is an important habitat for wildlife. Wood pasture is created and maintained by a combination of grazing animals, usually cows, and widely scattered ancient trees. Cows are preferred grazers in woodlands because their long tongues wrap around the vegetation and rip out clumps. This ensures a varied height of vegetation and tiny areas of bare ground where seeds can fall and germinate. Trees are ‘open grown’ in wood pasture, they develop big buttress roots and have short fat trunks and thick branches.

Recently many areas of wood pasture in the Lake District have been rejuvenated by carefully managed tree planting through environmental schemes. A good place to see wood pasture is in the Troutbeck valley near Windermere, or in Westmorland Borrowdale. A walk through these valleys will demonstrate the varied flora and fauna of wood pasture, and you may catch a glimpse of the hard working free ranging cows who are working to maintain these landscapes.

Across the Lake District there are a variety of wild species living on the commons and high fells, including the rare population of Natterjack toads on Subberthwaite common, and on a summers day you can lose count of the numbers of different bees, dragonflies and butterflies that are buzzing about. You may be lucky and see an otter travelling on a high route across a common to get to another watercourse, or a vixen peeping out from behind a drystone wall where she is sheltering her young cubs. Following a snowfall the surprising abundance of footprints across the fells and valley bottoms is testament to the thriving nocturnal community of wildlife species. Sustainable, traditional farms in the uplands produce not only food but environmental benefits for the nation – natural capital.

The 2018 'State of the Park' report identified that there is a huge potential for restoring nature in the park. A great start has been made on this by restoring 4967 hectares of peatland. There is an urgent need to improve on the state of nature within the park. The nationwide decline in biodiversity is well known and accepted and the Lake District has not been immune to this. In the last 20 years much work has been done to try to maintain and restore existing habitats and species in the National Park.

The Government’s 25 year Environment Plan sets a new challenge to achieve the large scale habitat recovery and reconnection required to deliver a full range of public benefits through the development of a ‘Nature Recovery Network to protect and restore wildlife, and provide opportunities to re-introduce species that we have lost from our countryside’. The Nature Recovery Network is seen as the vehicle for delivering the recommendations of the Lawton Review and also for building resilience to climate change, conserving pollinating insect populations, restoring peatlands, carrying out natural flood management, expanding woodlands, whilst delivering a wide range of social and economic benefits. Farmers in some areas are now involved in facilitation groups to deliver nature recovery networks at a landscape scale, some of which may be done through the new Environmental Land Management Scheme when it launches in 2024.