We look forward to welcoming visitors back to the Lake District. We are working with our local partners to put measures in place that will help keep people safe.

Our page lakedistrict.gov.uk/coronavirus has a message from our Chief Executive, how the latest coronavirus rules apply across the National Park, updates on our attractions and services, and how you can contact us.

On 11 March 2020, the Honourable Mrs Justice Lang DBE granted permission for the claim for judicial review to proceed. The matter was transferred to the Administrative Court in Manchester for administration and hearing.

The judicial review took place remotely with Justice Dove on 2 and 3 June 2020.  The decision was reserved and will be received in due course.

At the Rights of Way Committee on 8 October 2019 members discussed the reports and associated papers. Please take a look at the summary below.

These routes are both public roads, partly tarmac and partly unsealed.  As such pedestrians, horse riders, cyclists, motorcyclists, and motorists can use their whole length. The roads were originally well-built stone roads that served agricultural and quarrying activities and, as such, form part of the historic heritage of the area.

During the past 20 years or so, motor vehicular usage of both these roads has increased. At the same time, minor maintenance of the surface and drainage appears to have declined, and there have been at least three severe weather incidents (2005, 2009, 2015).  The combination of all this has led to a deterioration in the surface of the Tilberthwaite road in particular, to a degree where some agricultural traffic was having difficulties in accessing the land for farming purposes.

In 2017 we initiated a project to look at the future management options for these two unsealed roads.  We are delivering this project in conjunction with Cumbria County Council and the National Trust (who own the farms and surrounding land).

The Tilberthwaite road has been repaired, and the surface subsequently monitored.  We have collected evidence through drop-in sessions, online and onsite surveys, as well as collating data on usage levels.

There are three parts to the report that were taken to committee - please click on the buttons to read the reports. For a short summary of the project so far, please read the Frequently Asked Questions below.

A paper copy is also available for any member of the public to inspect, this is held by the Contact Centre at our offices in Murley Moss, Kendal. It is advisable to arrange a time to visit before arriving by phoningFind out how to get to the office.

Where are the roads?

The two roads are shown on the map below in red and blue:

What is the public status of these roads?

They are both public through roads, with around half of their length being tarmac, and half being unsealed, that is: not tarmac covered. Both tarmac and unsealed sections are covered by the same highway legislation as other public roads such as the A593 or Wrynose Pass. They are maintained by Cumbria County Council. Although the National Park has no legal responsibility to maintain these roads, we recognise their importance as part of the overall rights of way network that people use to enjoy the national park. The roads are part tarmac, and part unsealed, however, we are being requested to restrict motorised traffic only on the unsealed sections of these two roads.

How do these roads fit into the Rights of Way and access network?

In the Lake District National Park, there are some 3280km of public unsealed minor roads, byways open to all traffic, restricted byways, bridleways and footpaths.  There are legally established, or presumed, motor vehicle rights on around 121km of these.

What is the issue?

Motor vehicular usage of both these roads has increased over the last 20 years or so.

At the same time, minor maintenance of the surface and drainage appears to have declined, and there have been at least three severe weather incidents (2005, 2009, 2015).  The combination of all this has led to a deterioration in the surface of the Tilberthwaite road in particular, to a degree where some agricultural traffic was having difficulties in accessing the land for farming purposes.

A campaign group, Save the Lake District, has asked us to make a Traffic Regulation Order (TRO) prohibiting motor vehicles on the unsealed portions of these roads.  As a National Park Authority, we have been granted powers to prohibit traffic on unsealed public roads of this nature (Defra guidance on this can be found here)

The issues of concern raised by campaigners include:

What was or is the condition of the roads?

The Tilberthwaite road was fully surveyed and many surface issues were identified for repair works.  As a result the road has been resurfaced for the first time in many decades (photographs below).

The High Oxen Fell road has been surveyed, and Cumbria County Council, ourselves and the National Trust consider that it is suitable for the current use, and we will continue to monitor the route. The surface remains fairly stable.

Can a Traffic Regulation Order (TRO) restrict 4x4s and motorbikes?

A TRO allows all or some types of traffic, including 4x4s and motorbikes, but also pedestrians, cyclists and horse riders, to be legally prevented from using a public route permanently, partly or occasionally. However there has to be grounds for doing so, based on facts and evidence, not just opinions or perceptions.

What options did the National Park’s Rights of Way Committee have to consider?

The main options for the committee to consider were:

b. Maintain the surface, but do nothing else

d. Prohibit some motor vehicles, or for some activities (such as commercial operators), or in certain circumstances (such as during winter, or one way)

The main decision that Members were asked to make is: is the recreational motor vehicular use of these two unsealed roads so inappropriate and unacceptable that it should be prohibited?

And if not – then which is the most appropriate option for each of the two roads?

What happens now the Committee have made their decision?

At its meeting in October 2019 the Rights of Way Committee decided by a majority vote to agree the reports recommendations;

Consequently we will be inviting representatives from interested parties to join a Partnership Management Group (PMG) to work together on the future management of the U5001. We hope the group will be able to meet in early 2020 to take this important work forwards.

We will provide updates on the progress of the PMG on these pages.

As a separate piece of work we will work with partner organisations to monitor the use of the U5004.

What about other unsealed roads in the National Park?

We envisage the robust and structured approach to the future management of the Tilberthwaite and High Oxen Fells roads as helping inform the Authority when considering future issues arising on other unsealed roads in the National Park.

How does this type of use relate to UNESCO World Heritage Site status?

Photos shows part of the Tilberthwaite road before and after the maintenance work was completed in January 2019. 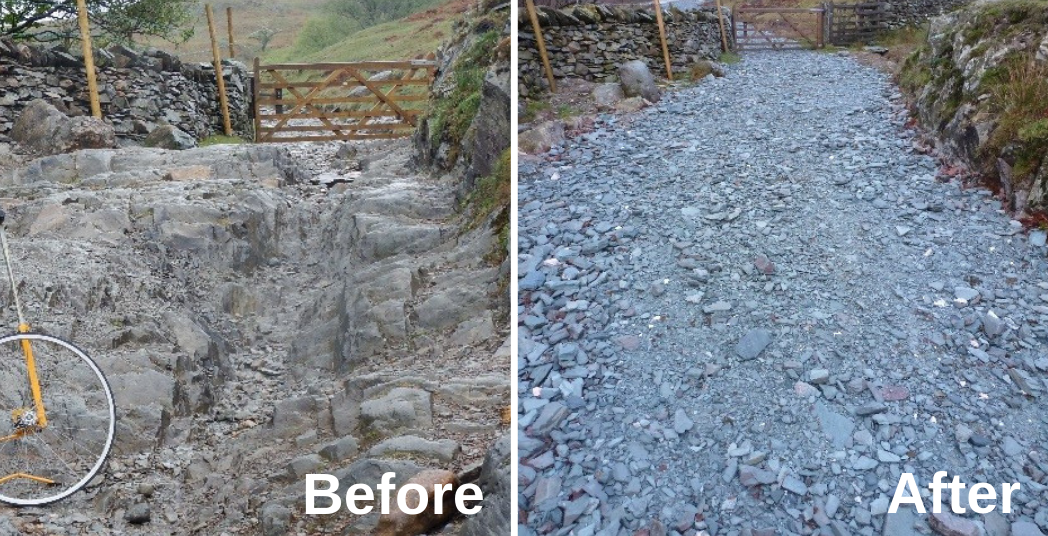 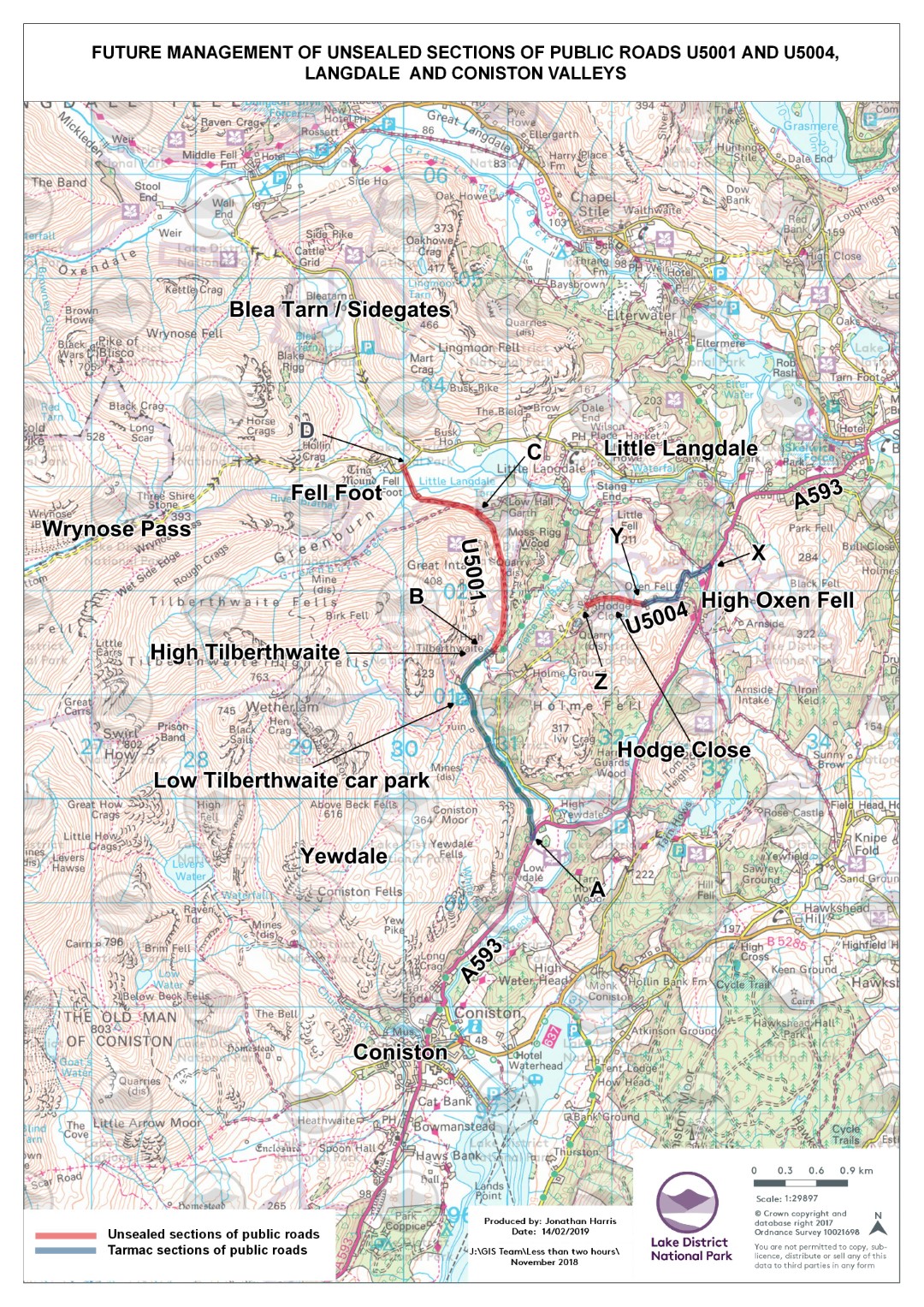