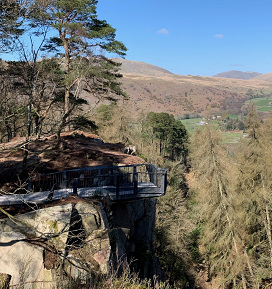 A new, state-of-the-art viewing station will give visitors the chance to look at an iconic Eskdale view from a new angle.

First popular during the Victorian era, Stanley Ghyll is known as one of the ‘finest waterfall ravines’ in the Lake District and since December 2020, the National Park Authority has removed around seven hectares of invasive rhododendron to make the most of this iconic view. This specialist work was carried out by Lake District National Park rangers, contactors and a team of dedicated LDNPA volunteers.

Lake District National Park, Area Ranger Rec Cathey said: “There has been a dramatic, tangible transformation in just a short space of time and long-term, the environmental and aesthetic improvements will be immense. We stripped back the rhododendron to encourage the growth of native Lakeland vegetation, and specialist engineers made safe the granite walls that had been ‘root-jacked’ by the rhododendron. This has completely transformed the site with birdsong and light.”

During the work, a number of rock faces and trees across the site, and directly above the footpath were discovered to be unsafe. Unable to make the site safe for the public immediately, a section of footpath was closed temporarily. Work to stabilise most of the rock faces within the gorge is now complete and most of the site is now open.

Rec Cathey explained: “Unfortunately, in April 2021, rock falls just above the final bridge badly damaged the narrow path between the bridge and lower falls.  This has made the path unstable and unsafe.  Because of the loose soil and sloping bedrock, it is not going to be easy to rebuild and we are investigating the quickest and best way of doing this.”

All the other rights of way in Stanley Ghyll are open for use, and a new Victorian-inspired cantilevered viewing station will help people take in the stunning view safely.

Rec continued: “In keeping with the site’s Victorian heritage, we have installed a viewing station at the top of the 150 foot drop. It really is an awe-inspiring sensation; to look down beneath your feet to the raging torrent below, take in the newly-revealed multi-drop waterfalls to the south or gaze up to the Scafell massif to the north west.”

The galvanised steel structure – designed and installed by renowned metalworker Chris Brammall and his team at CB Arts in Ulverston - is angular and faceted, mirroring the fractures in the granite and juts out five metres over the 150 foot drop. Pre cast counter balance weights create the path and are finished with a local aggregate, non-slip surface which lead you to the open mesh flooring of the cantilevered ‘brave’ or platform”

The viewing station was funded by a grant from the RDPE and the rhododendron removal work was funded by the National Park with an additional Countryside Stewardship grant.