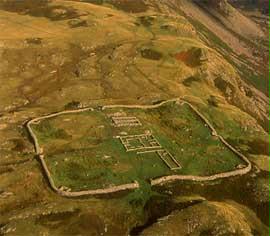 Little visible evidence survives from the post-Roman period after 400 AD. This may be because it is buried beneath present day villages. But pollen grains found in lake sediments tell us there was a new phase of tree clearance and farming in the late sixth and seventh centuries.

It is not until the tenth century that we again find physical evidence for people in the landscape. Norse people who had originally settled in Ireland came to the Lake District to escape political turmoil. They constructed monuments like crosses and earthworks marking significant places.

You can sometimes tell where Norse people lived because of local place names. Names ending in –by such as Ireby mean village. Those ending in –thwaite, like Satterthwaite, mean clearing. Other words with a Norse origin are: