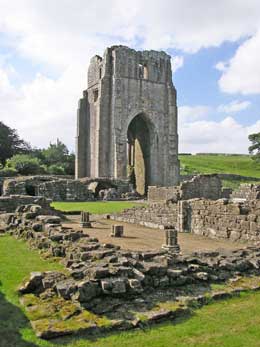 In 1092 the Normans took over Cumbria. Land owned by the King was divided up and controlled by lords of the manor and later by monasteries. The King owned large areas of uplands but allowed the lords to manage them as forests or ‘free chases’. Forests were not covered in trees but places to graze stock and keep game animals. The lords created deer parks, for keeping and hunting deer, and large dairy farms called vaccaries.

Monks founded monasteries at Calder, Shap and Furness and made a living by selling iron and wool at markets. They used charcoal, made from timber from the local woodlands, as fuel to produce iron from local ores. Wool came from the sheep that grazed on land cleared from woodland.

Packhorses transported goods to markets along new packhorse routes and bridges. The origin of the present day pattern of villages and stonewalled fields can be traced back to this time.

By the eleventh century, the lords of the manor owned most of the land in the Lake District valleys. The lords allowed tenant farmers to grow crops on the valley floor or inbye land and graze their animals on the fellside. A wall called the ring garth separated the inbye land and fell side, which prevented animals from trampling and eating the crops.

An increase in population in the fifteenth century meant that more land was needed to grow food crops. This led to farmers enclosing and farming land above the ring garth and onto the fellside, a process known as intaking. 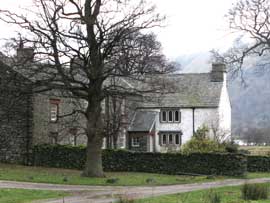 When Henry VIII closed the monasteries in the sixteenth century Reformation, land previously owned by the monks was sold. The lords of the manor also let or sold a lot of their land to tenants. Previously open fields of inbye land were split into separate estates by independent farmers called statesmen, although farmers still had the right to graze on the fells. Population expansion slowed down and some farms were deserted; others were incorporated into larger estates.

By the eighteenth century, enclosing land by building walls around areas of the fellside was commonplace. Landowners could apply to enclose land under an Act of Parliament. These parliamentary enclosures are often large and square or rectangular, with very straight walls.

Cloth from Shap Abbey was exported as far away as Italy! In 1315, an Italian wool-buyer’s list names Ciappi in Vestrebellanda - Shap in Westmorland - as one of his suppliers in the British Isles.