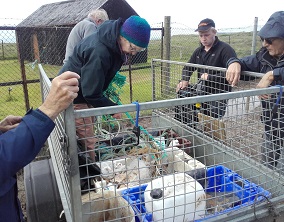 Spoils from one of the world’s dirtiest seas were collected from a Lake District beach last Saturday (16 Sept) bearing the brunt of marine mess.

Ranger Phil Clague said that as well as an important clearing operation, data was collected and fed back to MCS to help monitor long-term trends in marine litter and coastal pollution.

He explained: “The aim is to look at long-term trends in marine litter, and to try to identify major sources of rubbish. Our volunteers and helpers work regularly on the Lakes’ west coast beach hit by waste from the Irish Sea.

“There’s always a depressing collection of debris, with some very unusual finds. In the past we’ve had an Indian driving licence, a 50 gallon barrel of lard, dead whales, lonely heart messages in bottles and huge numbers of balloons, which often come from advertisers, parties or corporate events.

“As well as being unsightly, marine litter causes huge problems for the marine wildlife through poisoning, chocking or entanglement.”

There was nothing too unusual from Saturday’s event, except a section of car radiator hose, which a volunteer took home to see if it would fit his vintage tractor.

There were a number of events happening locally. This collection linked with a separate litter pick on the next section of beach and produced a total 50 bags of rubbish.

Phil said the Great British Clean was a key day for the country’s beaches, giving a widespread assessment of the coastline’s state and allowing MCS to mount campaigns to try to stop rubbish at source.