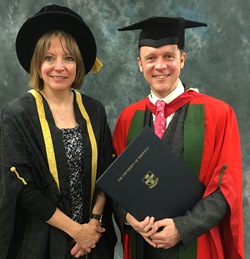 In recognition of his significant achievement in the field of geography, Richard Leafe, chief executive of the Lake District National Park, has received a Doctor of Letters honorary degree from the University of Sheffield.

Since completing a BSc and MPhil in geography at the university, Richard has gone on to accomplish a successful career, including roles at Natural England and the Lake District National Park, where he has been chief executive for eight years.
Receiving his doctorate on Friday (15 Jan) Richard said: "I am delighted and proud to be recognised by Sheffield University for my contribution to geography. I look forward to developing future links with the university and hope to pass on my experience and inspire those who are starting out in this field.”
Richard is never happier than when he’s outdoors and enjoys walking, cycling and skiing and is also a fellow of the Royal Geographical Society where he sits on the Expeditions and Fieldwork Committee.
Picture shows:
Professor Shearer West, Deputy Vice -Chancellor of Sheffield University, presents an honorary degree to Richard Leafe at Sheffield University’s winter graduation ceremony on Friday 15 Jan 2016.