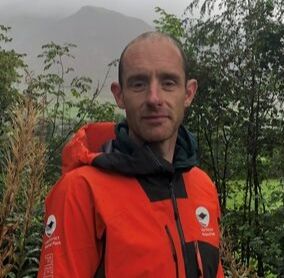 Wes Hunter has been announced as the Lake District’s newest Fell Top Assessor. Wes was brought up in the area, attended school in Keswick and considers the Northern fells to be his old stomping ground. He’s super excited to be back in the area and taking up his new role with the National Park.

Wes says that whether you’re venturing out onto the highest fells or trying something more low level it’s important to be prepared: “It’s all about being aware of the conditions and the forecast before you set out, and using this to make an informed decision about whether it’s safe, and within your capabilities. I’ve used the Weatherline service lots over the years and think it’s an invaluable service.

“The Fell Top Assessor rota suits me down to the ground as I run my own business and I have a three year old daughter who keeps me busy the rest of the time. I’m looking forward to the variety, from leading winter skills courses to doing the actual weather readings, I know every day will be different, but I’m up for the challenge. I can’t wait to get started.”

Wes’ adventures have taken him as far afield as Europe, Morocco, Canada, Australia, New Zealand and Nepal. He’s even scaled the dizzy heights of the iconic 3,000 ft tall El Capitan in the USA (twice) which has been a highlight.

However, one of the most rewarding aspects of his career to date has been working with disadvantaged children and those with special needs to ensure that they had a taste of the ‘great outdoors’.

He’s delighted to be back at home in the Lake District and joining the Fell Top Assessor team where he’ll work with Jon Bennett and Zac Poulton from December until April.

Each day during this winter season, one of the Fell Top Assessors will summit Helvellyn to get a ‘boots on the ground’ condition report and take weather readings to help inform walkers and climbers.

Andy McGirl, the Lake District National Park’s Retail and Commercial Manager said: “We’re delighted to welcome Wes as a Fell Top Assessor and are sure he’ll be an asset to the team. All we’re waiting for now is some wintry weather.”