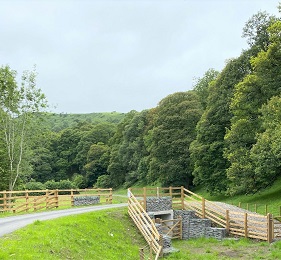 The £7.9 million project to reconnect the much loved Keswick to Threlkeld railway trail is nearing completion with only two months to go to its long awaited reopening.

A one kilometre (0.6 mile) urban section of the trail opened last month and is already being well used by the local community.

As part of the project, a new section of the route has been constructed to replace the trackbed which was washed away during Storm Desmond, when floodwater from the River Greta engulfed the trail and surrounding farmland.

We have worked with neighbouring landowners to create a new 300m section to fully reconnect the accessible route. The surrounding area is important for local sheep farming so fences and underpasses have been constructed so that farmers can continue using the land for lambing and grazing.

Work to protect the riverbank from future flooding is also underway. Stone filled baskets will provide additional strength to the banks, whilst fixed bundles of brushwood will help absorb the powerful, energy of the river and prevent further bank erosion.

In addition 35 oak saplings will be planted alongside the existing oak woodland. The mixture of tree ages will help provide valuable habitat and food source for many insects, birds and other animals, including the iconic red squirrel.

Mark Eccles, Head of Park Management with the Lake District National Park Authority said: “We are really pleased with how work is progressing on this ambitious project which will reconnect the Keswick to Threlkeld Railway Trail for many users and make the bridges and riverbanks more resilient to cope with future weather events.

“We know that excitement is building in our communities for the many benefits this improved route will bring.

“Despite the Covid-19 situation, we’ve managed to keep the project to schedule which is testament to the positive partnership approach we’ve taken with contractors and funders.

“We look forward to the trail reopening by the end of December.”

Severe flooding in December 2015 caused extensive damage to the Keswick to Threlkeld Railway Path. Two former railway bridges crossing the River Greta were unseated from their abutments and irreparably damaged by the flood water. A third bridge was left badly damaged and at risk of collapse.

Around half of the Keswick to Threlkeld Railway Path was damaged and inaccessible and impacted on thousands of local people and visitors who enjoyed the route every year.

Thanks to a funding package from Highways England, the European Structural and Investment Funds, the Local Enterprise Partnership and community support from the Lake District Foundation work began on the reconnection of the trail last year and is expected to be completed by December 2020.

Photo above shows the new stretch of path with underpass for farming use. 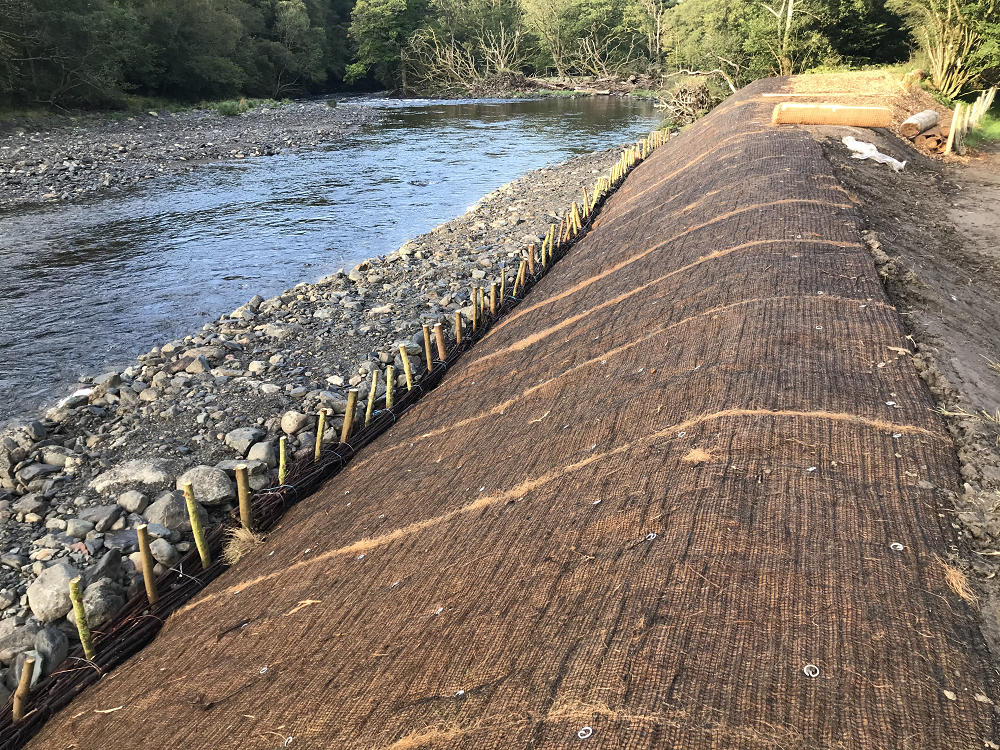 Photo shows some of the river bank protection. The geo-mesh on top is made from hessian materials laid on top soil and impregnated with seed to promote vegetation growth which will stabilise the bank. The brush bundles soften the energy of river and prevent further bank erosion.