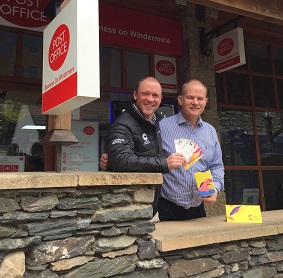 Today the Lake District Pounds officially launched and are available to buy and spend at many locations across the National Park, including Visitor Centres and Brockhole.

Richard Leafe, Chief Executive at Lake District National Park, said: “I’m excited to see this project launch and to be spending my Lake District Pounds for the first time. It’s an exciting new scheme for the national park, with the potential to really support our local economy.

“This is an opportunity to shine a light on the fantastic local businesses within this World Heritage Site and to contribute towards the efforts made to care for this special place.”

Launched by The Lakes Currency Project, the Lake District Pound is now available to spend in more than 170 businesses, in an effort to encourage more customers to shop local.

The uniquely designed currency and accompanying merchandise, which will feature new illustrations each year, can be picked up at 14 exchange points across the Lake District, including Bowness Post Office.

Gordon Aylmore took over the Post Office in Bowness last year. He said: ““We’re delighted to be taking part in this scheme and are looking forward to both businesses banking their new currency, as well as customers buying the unique pounds, with us.”

The scheme is donating all profits made, through pounds being bought but not spent, to two chosen charities; Cumbria Community Foundation and the Lake District Foundation, which is currently campaigning to rebuild the LDNP’s Keswick to Threlkeld Railway Path.

This month the Lake District National Park will open its reviewed Local Plan policy documents for public consultation and is incentivising people to get involved and have their say on the revised policies, with LD£1,000 (one thousand Lake District Pounds) up for grabs. To find out more about the competition and Local Plan Review visit http://www.lakedistrict.gov.uk/localplan