Search on for local housing sites 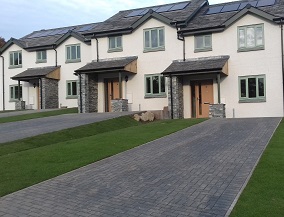 With significant numbers of people across the Lake District in acute need of affordable housing, a call has gone out to spot development sites.

Starting today (Wednesday 12 April) the push to find plots of land with potential for homes and employment follows a similar successful mission in 2010, which led to the allocation of 453 new properties in 31 locations.

The call for sites runs until Friday 2 June in an exercise described as invaluable by Lake District National Park’s director of sustainable development, Steve Ratcliffe.

He explained: “This offers real potential to influence growth in local and affordable homes at a time when the average house price in the Lake District is over £322,000 and the lower end of income levels is around £18,700.

“Many local families, couples and individuals are in great need of reasonably priced homes and we urge landowners and members of the public to contact us with ideas. Alongside houses, we are looking for sites suitable for offices, creative workspaces, retail and tourism. We need continued investment if we are to realise the vision for the National Park.

“We were delighted by the response seven years ago and are hopeful the reaction will be as positive this time. There is a real need to help redress the imbalances in the Lake District’s housing market and provide floor space for job opportunities.”

Steve added that last time around people had found the process of putting the site forward and getting planning approval both positive and straightforward. He recommended others get involved and make suggestions.

One of the sites identified in the last call was Sheep Dog Field in Keswick, where 45 affordable and 10 local occupancy houses were subsequently developed by Penrith-based Atkinson Homes, together with Impact Housing and Keswick Community Housing Trust.

Even relatively small locations can be considered. Those approved will go forward and be included in the Lake District National Park’s local plan, which is currently under review.

The call for sites finishes at 4:00pm on Friday 2 June. Suggestions can be made either by email to localplan@lakedistrict.gov.uk or by post to the Strategy and Partnership Team, LDNPA, Murley Moss, Oxenholme Road, Kendal, LA9 7RL. Further information is also available on lakedistrict.gov.uk/sites or by calling 01539 724555.