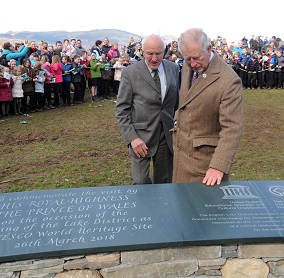 As His Royal Highness, The Prince of Wales, today unveiled a special installation to mark the National Park’s World Heritage inscription, he hailed future opportunities for the Lakes.

Greeted by cheering crowds, early spring sunshine and more than 500 schoolchildren at Crow Park, Keswick, the Prince said he hoped UNESCO’s recognition would help local businesses and draw more investment to the region.

He said it seemed entirely appropriate that the Lake District’s inscription was in the Cultural Landscape category describing how the ‘incomparable beauty’ was a consequence of more than one thousand years of human activity.

His Royal Highness explained: "To me, it is something of a triumph that this traditional land use continues to this day, even in the face of severe social, economic and environmental pressures.

“As we stand looking out over Derwent Water towards Borrowdale, the importance of the link between human activity and landscape could not be clearer."

The Lake District National Park Partnership, which managed the bid for UNESCO status, was spearheaded by Lord Clark of Windermere, who gave a welcome speech at the event. He said sitting alongside the world greats, such as the Great Barrier Reef, the Lake District had its own international significance and would make its own unique contribution.

"This isn't a designation simply for the Lake District,” Lord Clark said. “It is for the benefit of Cumbria, the UK and the wider world."

A programme of performances was commissioned by Theatre by the Lake and included a dance piece by its Young Company and The Hired Man by St Herbert’s Primary School, Keswick, including an introduction from pupil Thomas White. Actress Elizabeth Mansfield sang Hymn of Love Homage by Piaf.

Photo shows The Prince of Wales meeting school children and members of the public who came to Crow Park, Keswick, to celebrate the official unveiling of the plaque installation to mark the Lake District as a UNESCO World Heritage Site.

The UNESCO plaque, a requirement of all World Heritage Sites, is set within an installation built from locally-sourced drystone and slate from Honister Slate Mine, with recycled stones from the National Trust’s Crow Park donation cairn.

The plaque cites the English Lake District as officially being inscribed on the World Heritage List and declares that: ‘Inscription on this List confirms the Outstanding Universal Value of a cultural landscape which deserves protection for the benefit of all humanity.’

The Lake District National Park Partnership chose a National Trust owned site, Crow Park, as the perfect home for the official plaque with its stunning landscape view, good public access for all and strong representation of the three World Heritage Site themes of cultural landscape: identity, inspiration and conservation.

The special inscription event was made possible through funding from the European Agricultural Fund for Rural Development as part of the LEADER programme.

Find about more about the Lake District’s World Heritage Site status at lakesworldheritage.co.uk, and join the conversation on social media using #WeAretheLakes.

Photo shows The Prince of Wales joined by Lord Clark of Windermere at the installation in Crow Park, Keswick.