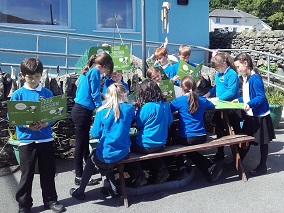 Rookie reporters are on a roll across Cumbria as junior pupils pen push for Lake District World Heritage status.

Split into five distinct areas, every county primary school been sent a Your Mission pack, encouraging aspiring media talent to come forward with their stories.

Lake District National Park’s learning co-ordinator, Ruth Suddaby, explained the exercise was about getting a valuable perceptive on children’s thoughts and ideas. It also encouraged them to get involved in the exciting World Heritage campaign.

She added: “We’re asking for community interviews and stories through words, photographs, videos and drawings. We want messages too and thoughts to share in 50 to 100 years’ time.

“It’s an excellent way for children to learn more about their environment, history and the Lake District generally. Each area will have a winning class, which gets a video camera for their school.”

Mum and National Park ranger, Suzy Hankin, whose children go to St Herbert’s in Keswick, praised the initiative saying Your Mission gave plenty of food for thought and opportunities to be inventive.

She added: “As the Lake District is bidding for World Heritage recognition it’s great that our children can be involved. Their words, suggestions and pictures will be there for future generations to enjoy.

“There’s loads of learning to be had too and I’m sure the mission will go down well with teachers and pupils alike.”

The World Heritage pack for schools has been sponsored by United Utilities and the closing date for entries is Friday 16 June.

Packs can be downloaded at lakesworldheritage.co.uk/schools.