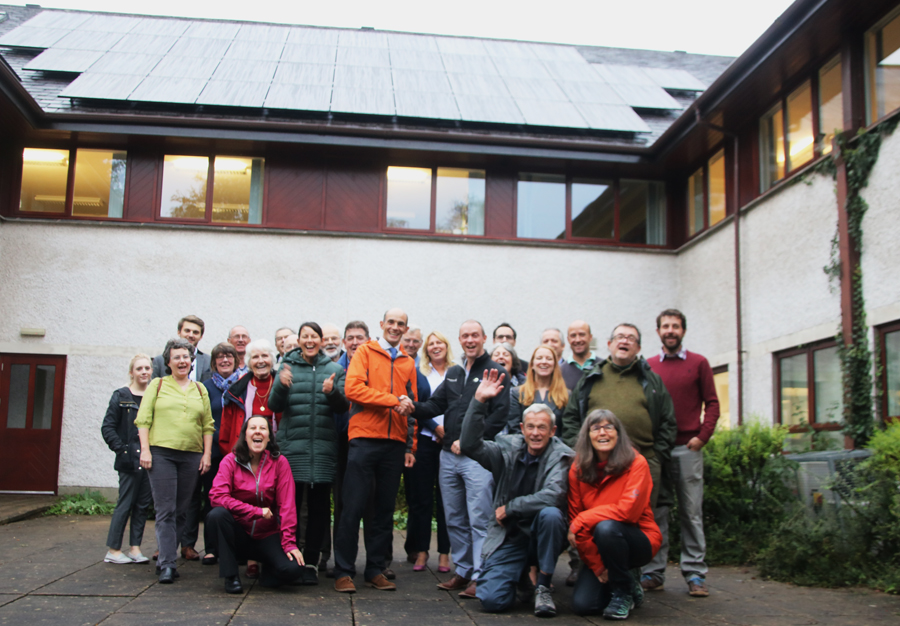 For the first time in the UK, a national park is buying green electricity directly from its local community.

On September 8th 2016, Community Energy Cumbria Ltd (CEC) started generating electricity on the roof of the Lake District National Park (LDNP) head office in Kendal from a 30kw solar photo voltaic array, powering computers, lighting and electrical equipment throughout the building. It marks a pioneering approach to how the Park manages its assets for the greater benefit of the community.

Both organisations are united in the underlying reasons for embarking on this new arrangement. Tackling the causes of climate change, producing clean energy, keeping financial capital circulating in the Cumbrian economy and providing long term opportunities for local businesses all help to explain why the project came about.

Community Energy Cumbria Ltd, established in March 2015, is registered as a ‘community benefit company’ so that any profits, by law, must be returned back into the local community.

Phil Davies, a founding Director of CEC explains: “The company was set up to ensure that, as a county, we prosper from the ‘green revolution’ without compromising our outstanding landscape. In the last 10 years, we know that much of the profit from renewable energy installation and generation simply leaves the county, with many local suppliers finding it particularly hard to compete against a national and international market.

“With the blessing of the LDNP, we’ve been able to contract Lakes Renewables from Kendal and Love Solar from Penrith to carry out the solar pv work, so we can feel proud that we’ve supported local businesses. On top of this, over 98% of the investment has come from members of the community living in Cumbria. Once we have paid back the annual interest on these investments, any profits will be directed back into projects that help groups and individuals in Cumbria to realise their community or environmental ambitions. It means that all of the money keeps circulating here in the county.”

Despite being almost hidden within the courtyard of the LDNP offices at Murley Moss, Kendal, the new 107 panel system will make a significant environmental impact, reducing CO2 emissions by nearly 10 tonnes per annum for at least the next 20 years.

“This is a really important contribution to our carbon reduction targets,” stressed Richard Leafe, Chief Executive of the LDNP and a strong supporter of the project.

“It means that we can lead by example, having already cut carbon emissions by 39% since 2008 across our operations. But equally importantly, this exciting partnership means that we can achieve this in a way that supports skills and businesses across Cumbria. I’m also  encouraged by the fact that this is a purely community driven initiative. It clearly demonstrates the success that community ownership and management can bring to a project and how the National Park and county can simultaneously benefit. We get to buy cheaper, greener energy, whilst the community generates a profit that will be redirected back into other great projects.”

Find out how we're working towards a low-carbon Lake District.

Photo above shows: Phil Davies (left) of Community Energy Cumbria shakes hands with Richard Leafe (right) of Lake District National Park to mark the launch of the new 30kw solar panel array at LDNP head office, Kendal on 28 Sept 2016. They are joined by members of Community Action for Sustainability