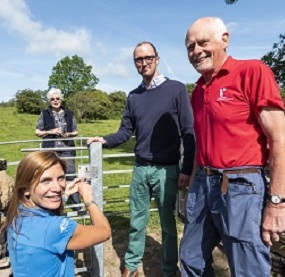 The Lake District National Park Authority has improved a much-loved walking spot at Helsington Barrows and Scout Scar, thanks to a generous boost from the Ramblers.

Scout Scar is very popular for quiet recreation for people of all ages. This Open Access Land provides a distinct and unique landscape and stunning, panoramic views of the southern Lake District. The flora of this limestone upland is beautiful and it is not surprising that the area is designated as a Site of Special Scientific Interest.

National Park rangers installed two new kissing gates after an approach from Kendal Ramblers’ Association. The work was funded by the Sharpe Legacy, a fund for the provision of facilities for the maintenance of freedom for fell walkers on the Lake District Fells. The project was made possible after agreement from the landowner, Richard Bagot of Levens Hall Estate.

Marian Jones, Area Ranger with the Lake District National Park Authority said: “This is a great example of partnership working and we are pleased that these new gates now give the public better access to this wonderful area for walking, running and dog walking. Dogs must, of course, be kept under close control at all times.”

David Staton Footpaths and Access Officer, Kendal Ramblers said: “The value of improved access to Helsington Barrows was first recognised by members of the Kendal Ramblers’ Association who have campaigned for the gates to be put in. Of course, it would not have been possible without the support of the National Park who have installed the gates and the agreement generously granted by the land owner, Richard Bagot.”

“We hope that the gates will encourage more to come to explore this unique landscape but for its protection for future generations we would like you to leave no trace of your visit and always take litter home with you.”