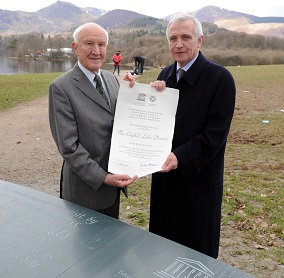 A new Chairperson has been appointed to join the Lake District National Park Partnership that led the Park to UNESCO World Heritage Site success.

The Partnership, made up of 25 organisations who work together to steer the vision of the Lake District, has welcomed Stephen Henwood as the successor to Lord Clark of Windermere.

Following more than ten years as Chair, Lord Clark officially handed over to Stephen Henwood at the inaugural World Heritage Site plaque unveiling event, which was given a royal seal of approval by His Royal Highness, The Prince of Wales.

Stephen said: “I’m delighted to be embarking on this new role. I’m very passionate about the Lake District National Park; it’s not only a place that I call home but an area that I love. I feel very privileged to be joining the Partnership at such an exciting time and I look forward to working with Partners to deliver our shared vision and drive forward the opportunities that World Heritage status will bring. We are very much at beginning of our World Heritage journey with many challenges and opportunities ahead and I look to build on the tremendous legacy left by Lord Clark. To ensure we maximise the opportunities we will need a strong sense of unity and commitment as a Partnership and to be fully engaged with the wider local community of organisations, residents and businesses.”

The Partnership has been seeking a committed and passionate individual to take the reins from Lord Clark who has chaired the group since it was first established in 2006, and is pleased to announce the new appointment.

Lake District National Park’s Director of Sustainable Development, Steve Ratcliffe, said: “This role is of huge importance and value to the Partnership; which in turn is vital in navigating this living, working landscape through both exciting and challenging times. Stephen will be a fantastic asset to the Partnership and we’re thrilled to be welcoming him as the new Chair.

“On behalf of all Partners I would like to thank Lord Clark for the sterling service he has given during his time as Chair and his dedication throughout the process of the World Heritage bid.”

Lord Clark said: “It’s been a real pleasure to chair the Partnership over the past twelve years, in particular to see first-hand the UNESCO World Heritage ambition become a reality. This is now a really exciting time for the Lake District as local organisations, communities and businesses embrace this global platform and I look forward to seeing this fantastic National Park continue to thrive as the Partnership drives further success in years to come.”