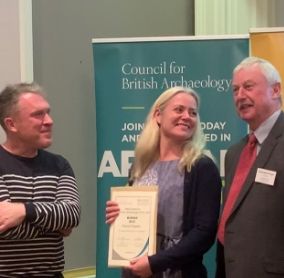 She received this notable accolade from the Council for British Archaeology’s annual Marsh Awards, as she has inspired many others in the community to get involved in heritage projects.

The Award recognises and promotes the results of research and fieldwork led by community groups which have made a substantial contribution to knowledge and wellbeing.

Penrith-based Eleanor has been with the National Park for 17 years and during this time has led a series of place-based projects enthusing and involving local communities and the Lake District Archaeology Network, to look after, care for and share what is special about the National Park’s historic environment.

One of Eleanor’s most successful community projects is Coniston Copper. She  involved local communities in the history, conservation and interpretation of Coniston’s nationally important copper mining heritage. Eleanor was the linchpin during the project’s development and implementation and, since 2014, she has been responsible for the Park’s Archaeology Volunteer Network, established to maintain and extend participation in archaeology within the Lake District.

Eleanor said: “I am honored to have been named community archaeologist of the year. To have been nominated by people in the community meant so much and has made the Award extra special.”

Duddon Valley Local History Group won the Community Project of the Year Award at the same ceremony for their Duddon Dig project. The Lake District National Park supported this project and Eleanor was on the steering group.