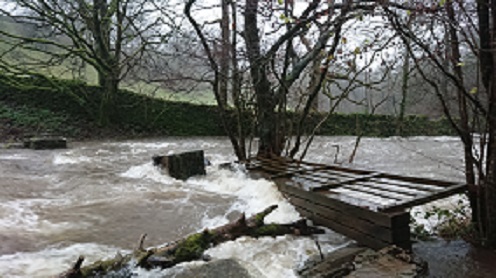 A team of flood recovery rangers from the Lake District National Park have begun work to reinstate two popular bridleway bridges at Troutbeck Ford near Windermere, which were damaged during Storm Desmond.

Work started on 14 September and is likely to be completed in December.

This work will improve paths for walkers, reinstate links for cyclists and horse riders in the area and open up the popular route once again.

The river has been impassable since the damage to the bridges and the diversion in place stops users being able to access one of the most scenic routes from Windermere to the Troutbeck area and up to Kentmere and the surrounding fells.

Ged Acton, Flood Recovery Project Manager, Lake District National Park said: “The new bridges will reinstate a key link in the local footpath and bridleway network for walkers, horse riders and cyclists. During the bridge construction work we have legally closed the bridleway that passes through Troutbeck Ford. Locals and visitors are kindly requested to respect this closure as machinery will be operating at the bridge locations during construction.”

This work is being carried out as part of the Government funded £3 million Routes to Resilience Programme to repair the damage caused by Storm Desmond, improve accessibility and strengthen resilience to the impacts of flooding in the future. Since January 2017 78 bridges have been reinstated or repaired, 60 paths have been restored and 38 gates, stiles and signs fixed.

Our photo shows the damaged footbridge on the East Channel at Troutbeck Ford which will be removed and replaced with a bridleway bridge.