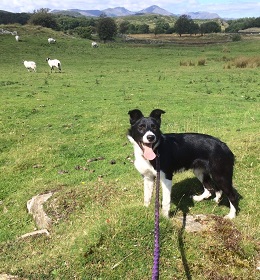 As lockdown is being lifted slowly and people may starting to think about venturing back to the Lake District when it’s allowed, the National Park Authority is asking visitors to ensure that puppies are ready for the countryside.

With a surge in the number of puppies being purchased in the last year we are expecting many new dogs and dog owners to visit the Lake District over the coming months as visitors return.

“We’re encouraging people to remember to keep their dogs under effective control and on a lead near livestock, wherever possible. As a new puppy owner myself I’m all too aware that the new sights and sounds of the countryside can be exciting for puppies, it can also make their behavior erratic.

“Even the most docile puppy can cause real harm to sheep. Ewes are now in the late stages of pregnancy and being chased by a dog can end up with sheep being killed or injured and the stress can easily cause them to miscarry.”

To help remind people of this simple safety message the Lake District National Park Authority has produced free information signs for farmers and land managers. The signs, which can easily be displayed on fences and gates, are available to download from lakedistrict.gov.uk/caringfor/farming and it’s hoped that they will limit the number of sheep worrying incidents throughout the Lake District this year.

The countryside code advises that dogs should always be under close control around livestock but if you are feeling threatened by cattle the advice is to drop the lead to allow your dog to run away.