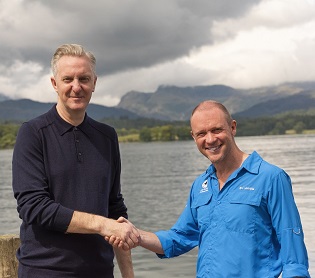 The feted bard’s passionate love story was met with cheers, tears and thunderous applause when his words featured in a ‘stunning’ short film, premiered at Zeffirellis, Ambleside, today.

Reflecting On The Lakes is a celebration, released to coincide with the Lake District’s first anniversary as a World Heritage Site and its 67th birthday as a national park.

Presenting his work to a captivated crowd, the celebrated Manchester poet said he had been delighted by the commission and moved by people’s reactions.

He explained: “The words aim to be as stirring as the visuals of the Lake District National Park are stunning.

“It’s bringing a tear to even the most jaded of eyes and one woman had to go home because of her mascara run!”

Of the film, Tony said he hoped people would ‘watch it and love it’ on www.lakedistrict.gov.uk/wow

Today’s audience gave a massive thumbs up, describing the work as ‘inspirational’, ‘perfect’, ‘moving’, ‘uplifting’, and having the ‘ultimate wow factor’.

Grant Seaton, of Cumberland Building Society, said: “This gives us a pride in the place, encouraging people to think about it as somewhere very special to live and work. It’s going to do good things, especially in encouraging us all to care.”

Tony explained that the poem's opening covers the long relationship between man and landscape.

“It’s the laughter of the children, it’s the ramblers’ romance

Reflecting On The Lakes is also a tribute to renowned Lakes’ writers, the ‘inspired romantic poets’.

“I paid my respects at Wordsworth's grave when I was at Grasmere recently and hope that the great man would recognise the shared passion for the place that the poem tries to convey,” Tony said.

LDNP chief executive, Richard Leafe, added: “I was delighted to see the audience’s reaction to the film today.

“Tony Walsh has interpreted the passion and pride of those who live, work and visit the Lake District perfectly.

“UNESCO World Heritage Site status has brought a fantastic platform to showcase the national park and we hope that this powerful piece of film will build on the status, inspiring everyone who watches it to help us protect and care for this special place.”

Reflecting On The Lakes www.lakedistrict.gov.uk/wow