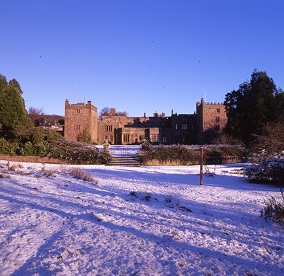 As 2018 begins, the Lake District’s only coastal village, is celebrating its place on the map as one of the only places in the world to have a double World Heritage Site status.

Muncaster Parish sits at the start of the Frontiers of the Roman Empire and is also part of the English Lake District. Two more good reasons to visit.

Following a bumper season for the village last year, the New Year is set to bring even more opportunities to make the most of the remote jewel in the Lakes’ crown.

Lake District National Park area ranger, Rec Cathey, said it was an exciting time and that a lot of work had been done to help worldwide visitors enjoy the stunning landscape and history.

She explained: “We have already rolled out the compelling community-led archaeology project tracking Romans in Ravenglass and provided great walk options, including an accessible route for all ages and abilities.

“The England Coast Path, due to open in this area in 2018, will take people into the village and Ravenglass has a regular train service, as well as top attraction, the Ravenglass and Eskdale Railway.

“It’s fantastic that people can get to this remarkable place by public transport and see for themselves why UNESCO recognised it as a World Heritage Site.”

She explained: “It amazes people that this small community on the national park’s western fringes should have the same status as the Taj Mahal and the Great Barrier Reef.

“They often come here without realising the Hadrian’s Wall connections and rich Roman heritage, revealed in our new Ravenglass Railway Museum and nearby Muncaster Castle, The Roman Bathhouse, The Beacon Museum and Hardknott Fort in the Eskdale valley.

For more detailed history and information about the great tourism location that is the Western Lakes visit www.westernlakedistrict.co.uk.

Peter Frost-Pennington, of Muncaster Castle, added: “It’s onwards and upwards for us and I can’t wait to promote and push our double World Heritage Site status for years to come.

“People need to know the scope and depth of what we’ve got here in the Western Lake District, the history, people, coast, mountains, scenery, industry, culture and heritage.

“World Heritage is absolutely positive, it’s given confidence and pride and will help us attract people to this incredible place.