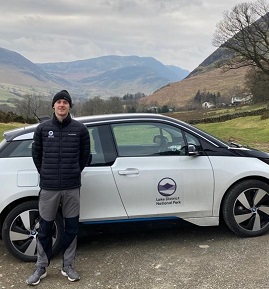 After 12 months of carbon emission reducing initiatives, staff, members and volunteers at the National Park Authority say they want to be a carbon net zero operation by 2025.

During the pandemic people were working from home, reducing travel, saving on utilities, and using the Authority’s new electric vehicles.

As a result, the organisation that looks after the national park says last year it reduced its carbon footprint by 33 per cent [1].

“Whilst we’re announcing this now, we’ve been committed to reducing our carbon emissions over the last decade. We’re also working with others to make an impact across the national park through our Low Carbon Lake District partnership.

“At the Authority we introduced new ways of working in response to the pandemic, some of which will become the new normal, and help us in our bid to reduce our carbon footprint.

“Some of those measures included cutting our mileage total by 243,471 [3]. And, whilst some travel is necessary, replacing most of our fleet with electric vehicles and improving charging facilities, means staff can do their job more sustainably [4].

“We were also able to make some of our buildings, such as visitor centres and head office, more energy efficient last year by replacing windows and improving insulation,” explained Richard Leafe.

Achieving net zero means that by 2025 the Lake District National Park Authority’s activities will result in no net impact on the climate from greenhouse gas emissions.

“This is crucial for slowing down the effects of climate change and means we’ll meet the latest Government guidance which is now law [5],” added Richard Leafe.

[1] The LDNPA recorded an impressive carbon budget decrease of 33 per cent last year.

[2] Earth Day is an annual international event designed to drive action on the environment and climate crisis around the world. This year's theme is “Restore Our Earth”

[4] The Authority now has 18 electric vehicles.

Image shows: Going green – Tom from the LDNPA’s Safer Lakes car parking team with one of the new BMW i3 electric vehicles.