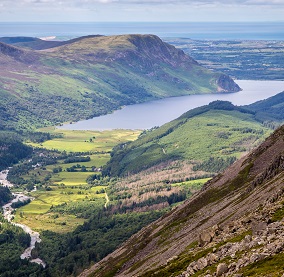 One year on from the momentous day in Krakow when the English Lake District became a UNESCO World Heritage Site, the organisations behind the successful bid are celebrating the achievements to date and looking to the opportunities that lie ahead.

On 9 July 2017 the Lake District joined some of the world’s most iconic locations, including Hadrian’s Wall and the Taj Mahal, receiving international acclaim as a world-class cultural landscape. This followed a bid for World Heritage Site (WHS) status which was driven by the 25 organisations that help manage the National Park through the Lake District National Park Partnership.

In the twelve-months that followed, a light has been shone on the Lake District through government and royal visits, new regional schemes and successful funding bids throughout the National Park.

Stephen Henwood, Chair of the Lake District National Park Partnership said: “We’re celebrating a fantastic first year of WHS status. It’s been encouraging to see businesses, farmers and residents starting to embrace the opportunities this inscription brings and seeing the influence it has already had on government funding and regional schemes. It’s just what we hoped for.”

“However, while we’ve set in place some strong foundations for the future, we must not be complacent about the action needed to grasp the potential benefits that World Heritage could bring.

“We need to continue to work collectively to ensure the Lake District retains a greater relevance in the thinking of the UK government, using WHS to argue for support, both financial and policy, ranging from post-Brexit farming to support to the tourism sector.

“I’d also like to see more local businesses and organisations use the new World Heritage brand in their marketing to raise their profile and drive new business. The inscription is not an automatic cash prize; it is an opportunity for us all.”

Looking ahead, a new English Lake District World Heritage Site brand has been developed collaboratively by the Partnership’s Marketing Group. This will be made available for all organisations, businesses and communities to use to help them make the most of UNESCO World Heritage Site status. It will be made available to the Partnership from July, followed by an official launch in September 2018.

Research by the county’s tourism body, Cumbria Tourism, has highlighted some of the initial successes generated through the World Heritage Site status and shows the potential for further application of the global status in years to come. The aim is not about attracting just more visitors, but encouraging our current visitors to stay longer and spend more in local businesses.

Businesses and organisations are invited to use the free World Heritage Site brand toolkit at: www.lakesworldheritage.co.uk/toolkit