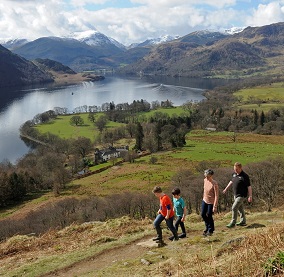 The Lake District National Park Partnership has reassessed its carbon footprint and is encouraging residents, businesses and visitors to support its efforts to reduce the impact of climate change on the Lake District.

An area-wide ‘low-carbon Lake District’ initiative, which seeks to tackle climate change, has reviewed the baseline carbon footprint in the Lake District, and for the first time has reviewed business emissions too.

Sam Hagon Strategy and Partnership Adviser at the Lake District National Park said: “Our approach is to decide what actions will deliver the largest carbon savings. We have a focus on visitor travel as transport has become more important since the previous assessment. Accommodation, food and drink are also important as combined they make up the second largest area of greenhouse gas emissions.”

Residents of the Lake District can join the initiative too by making lifestyle changes, no matter how small. For example,

The climate change subgroup of the Lake District National Park Partnership took a pioneering approach in 2010 by setting out the first ‘carbon budget’ for a local area with the target of reducing the emission of carbon, and other greenhouse gases, by 1 percent per year. It has now taken a look back at the learning so far.

Sam Hagon added: “It is good practice to review the methodology used in the carbon budget at regular intervals. This review, seven years since the scheme launched, allowed us to identify what may be required to achieve greater carbon savings so that we are clear which actions make the biggest difference.

“Collectively we’ve saved over 340,000 tonnes of carbon dioxide, from activities such as sustainable transport initiatives, installing hydroelectric schemes and planting new trees. We are now saving almost 100,000 tonnes of CO2 per year. That’s equivalent to the carbon footprint of 5,600 people in the Lake District – or six times the population of Coniston.”

The Lake District National Park is encouraging people to be efficient in their use of travel as part of its Get Fit in the Lakes campaign, which is motivating people to walk, run, cycle and even swim around the Lake District in a bid to look after themselves and the environment.

Photo shows a family walking the Ullswater Way route where you can travel sustainably around the valley by boat, bus or on foot.