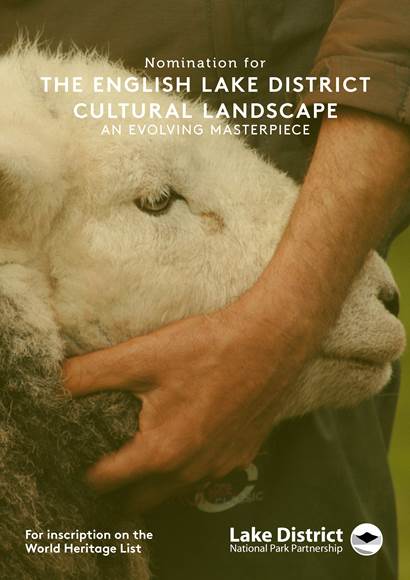 Partners including the National Trust, Cumbria Tourism and Natural England agreed the documents that make the Lake District’s case for being globally important and deserving its place on the prestigious World Heritage list. Once finalised, these will be submitted to the UK government and Historic England ahead of formal submission to UNESCO in the ‘cultural landscape’ category in early 2016.

The bid demonstrates how the landscape of the Lake District has been shaped by farming and local industry for thousands of years, which in turn inspired the Romantic poets and subsequent global conservation movement, including the start of the National Trust.

Mike Innerdale, assistant director of operations for the National Trust in the Lake District, said: “Caring for the future of this unique landscape is at the heart of the National Trust’s work here in the Lake District, but we work alongside many partners. The strength of this plan is that each partner has contributed not just their expertise, but also their commitment to nourishing this iconic landscape for the long term, both for the communities that live and work here and for those who experience it as a visitor. The future of a healthy, vibrant Lake District is in good hands.”

Richard Greenwood, head of operations for Cumbria Tourism, said: “It has taken a huge effort from all the partners to reach this stage. We believe there will be real benefits for the county’s visitor economy from World Heritage inscription – for example, just a one per cent increase in cultural visitors could boost our economy by about £20m. We will continue to play our part in making it happen.”

Steve Ratcliffe, director of sustainable development for the Lake District National Park Authority, added: “World Heritage is a huge opportunity for global recognition that will finally, and rightly, put the Lake District on the global map. It will raise its cultural profile, showcase the special relationship between farming and this stunning landscape which will continue to evolve, and create a real sense of community pride that will inspire future generations.”

This is the most significant milestone for the Partnership’s bid since January 2014 when the government confirmed the Lake District’s nomination.

Communities are being asked to get involved and share the journey to World Heritage status. Hundreds of Lake District schoolchildren have already started showing their support by collectively writing the ‘world’s longest letter’ in national stationery week in April, setting out the reasons why the Lake District is special to them. When complete, the 4800 metre long letter, donated by James Cropper Paper, will be displayed at Brockhole, the Lake District Visitor Centre.

The Nomination Dossier was formally endorsed at the Partnership meeting on 11 May 2015. Both documents will now be taken to authority meeting at the Lake District National Park Authority on 20 May 2015.