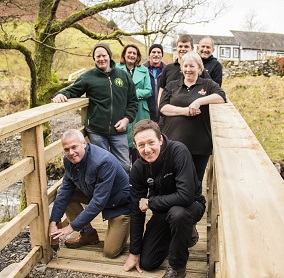 A programme of flood recovery work in the Lake District National Park is celebrating its 50th bridge repair with the project running ahead of schedule.

Today, Andy Tordoff from project funders, the Rural Payments Agency (RPA) visited the most recently completed bridge repair by the Lake District National Park’s flood recovery team and heard of the success of the project to date.

When an estimated £5.8million of damages were caused to the Public Right of Way network by Storm Desmond in 2015, RPA provided £3million from the European Agricultural Development Fund to support the Routes to Resilience recovery project. A team of dedicated rangers have been working tirelessly since January to repair and rebuild the damaged areas, whilst creating resilience measures to prevent future flood damage.

Ged Acton, Routes to Resilience Project Manager at the Lake District National Park, said: “We’ve reached the half-way mark of this 18-month project and we’re pleased to say that we’re ahead of schedule. The routes that our rangers are repairing make a considerable difference to local people, businesses and visitors to the National Park, and so we’re working through the projects as quickly and efficiently as possible.”

Andy Tordoff, Head of Northern Region for the RPA, commented: “The Routes to Resilience team are embarking on an ambitious agenda of work and it’s fantastic to see that the repair work is being completed as quickly as possible. Since January the rangers have completed over 100 projects, all of which contribute to communities and visitors across the Lake District.”

The 50th bridge repair being celebrated is at Mungrisdale, in the north Lakes, and provides a link between the Village Hall and Mill Inn pub, a route which is replied upon in the community.

Alan Bird, Mungrisdale Parish Council Vice Chair, said: “We’re thrilled that this flood recovery work is taking place in Mungrisdale. The bridge, which is a public footpath, has been out of action since December 2015 and without it there was a real risk to public safety. The only alternative route was to walk along the road which is very narrow and hazardous for pedestrians due to the blind corners."

Routes to Resilience launched in January 2017 to restore 64 bridges, 102 paths and 56 items of access furniture, such as gates and stiles, by September 2018.

Among the restoration work included have been extensive projects such as bridges at Bog House, Springs Wood and River Caldew, bank stabilisation at Gillside Campsite, and extensive drainage and track restoration along the Old Coffin Route in Rydal.

Alternative sources of funding are being sought to address the total repair bill following Storm Desmond, estimated at £10million.

As the popularity of the Lake District continues to rise, this repair and resilience work is more important than ever to ensure people can enjoy the National Park easily and safely.

Find out more about the Routes to Resilience project here: http://www.lakedistrict.gov.uk/caringfor/projects/routes-to-resilience

Photo shows: Andy Tordoff (left) Head of Northern Region for the RPA adds the finishing touches to the 50 th bridge to be repaired as part of the LDNP flood recovery programme. He is joined by Ged Acton, LDNP Routes to Resilience Project Manager (right) and members of the parish council and staff from the nearby Mill Inn pub.