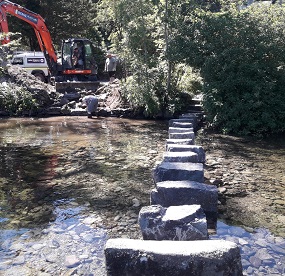 Much loved stepping stones in Rydal have been reinstated just in time for the school summer holidays as the Storm Desmond flood recovery scheme ‘Routes to Resilience’ nears its end.

This month a new route of stepping stones has been built across the River Rothay, just off the Under Loughrigg road, following the previous stones being washed away during the 2015 floods, which in total caused £5.8 million of damages across the Lake District.

Louise Waterhouse, Chair of Lakes Parish Council, said: “The stepping stones are a much loved local landmark as well as an essential crossing. They contribute greatly to the experience and local businesses are particularly delighted that they’ve been restored for the peak tourist season.”

Until now the river has been impassable and without the route in place walkers have had to divert half a mile upstream to Pelter Bridge whilst permission to re-build the route was acquired.

Dave Bell, Lake District National Park Ranger, said: “The stones have now been secured in place by setting them into specially pre-cast concrete slabs, and then landscaping these in with surrounding rock and gravel. This should keep them in place during future flood events, securing a more resilient crossing.”

Following the damages caused by Storm Desmond the Lake District National Park rangers have been implementing a Routes to Resilience (R2R) scheme, following £3m funding from the Rural Payments Agency, which has aimed to repair damages and instil resilience to avoid future flood damage. The R2R project has resulted in 74 bridges, 58 paths and 30 gates, stiles and signs all being restored and the team are on-track to meet the end of project deadline.

Ged Acton, Floor Recovery Project Manager, said: “Our rangers are flat out delivering Routes to Resilience jobs before the end of summer deadline and we’re confident of delivering this project in full so that access is restored for those who live, work and visit the National Park.”

Photo shows new stepping stones that have been built at Rydal following the flood damage of Storm Desmond.