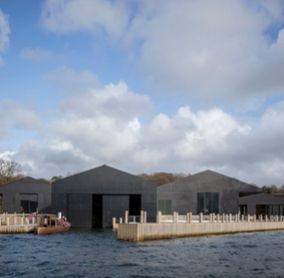 A new museum has recently received a prestigious excellence in planning award at the Royal Town Planning Institute Awards.

Windermere Jetty Museum of Boats, Steam and Stories opened earlier this year and has been well received locally, by visitors from all over the world and has now been formally recognised by judges from the RTPI North West Region.

These awards celebrate outstanding projects which demonstrate the power of planning in the North West Region. The judges were impressed with the style of the building, the way the new museum complex has been constructed and also praised the strategic way the Lake District National Park as the Planning Authority worked with the applicant and architects.

Ben Long, Area Planner with the Lake District National Park led on this project. He said: “We’re really pleased that the judges have recognised the quality and harmony of the completed Windermere Jetty development. The scheme is the result of true partnership working and especially the tireless efforts of the Lakeland Arts Trust to deliver a fantastic museum on the shore of Windermere.”

In order to assist the applicant and architects to bring forward their proposals in line with their timetable, the Lake District National Park Authority used a Planning Performance Agreement to provide prompt, in depth quality pre-application advice.

The Authority’s Ben Long commented: “We offer free pre-planning advice to any potential applicant on a drop in basis, but this was a much more formal way of doing things to progress the application and we worked very closely with Lakeland Arts and the architect. We’re delighted that the first contemporary building to be constructed on the shores of Windermere in over 50 years has received such an accolade.”

The judges were also impressed with the traditional boat building skills that are being retained and developed at the centre through the use of existing craftsmen and women from the region including Barrow-in-Furness.

Rhian Harris, Chief Executive Lakeland Arts, said: “The museum was designed as a cluster of buildings within the landscape and we think it fits in superbly with the lake and surrounding area.

“It’s brilliant to receive such a prestigious planning accolade in the first year of opening. We worked very closely with planning officers from the Lake District National Park who offered fantastic help and advice during the planning stages and helped us deliver a world-class museum in Cumbria."

The overall winner for the North West Region will be announced at an awards ceremony in Manchester on 18 October.