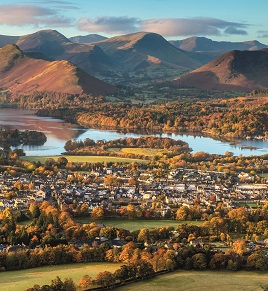 Twenty-five organisations, working together for the future of the Lake District National Park and World Heritage Site are inviting people to comment on their new, five-year plan tackling five major challenges.

Stephen Henwood Chair of the Lake District National Park Partnership says the inter-linked challenges will be close to many people’s hearts. He hopes people will want to find out more, have their say and get involved with the following issues facing the Lake District:

“We’ve a real chance to address the most critical issues facing the Lake District, and all humanity, taking a local approach to shape a better world,” explains Stephen Henwood.

“Given the scale and complexity of these challenges, delivering the plan will mean working together differently, having a strong influence and attracting new resources and funding. It’s about residents, businesses and visitors working with us to take action.

“The last plan resulted in some inspiring collaborative work from securing UNESCO World Heritage Site Status in 2017 to attracting funding for pilot farm and nature projects.”

“Government was also lobbied on issues such as affordable homes, better transport and broadband and, across the Park, small reductions in net carbon emissions were achieved. And the Partnership acted together well during emergencies - from flooding to the Covid-19 pandemic.

“This new plan builds on this success and records the next set of priorities – as asks of others, tasks for the Partnership, areas where local action is key, and lists where research is needed to guide our next steps.”

“This year we mark the 70th anniversary of England’s largest national park. It follows a pandemic in which we’ve seen the value people place on this protected landscape and how important it is for our and our nation’s wellbeing. It’s a place that’s loved by millions and cared for by many.

“And now there’s a great opportunity to work together to address the most critical issues facing the Lake District through this plan. Already shaped by many - including farmers, landowners, businesses, the tourism industry, local councils including the LDNPA and groups representing different users – it now needs testing with the wider public,” says Steve Ratcliffe.

The consultation runs from 25 May to midday on 23 June 2021. In addition to the challenges, strategies, evidence papers and proposed actions, the draft Plan also includes videos, blogs and infographics illustrating the proposals.

The final plan will hopefully be adopted by the LDPNA in autumn 2021.

The 25 strong partnership will then commit to seeing the Plan being actioned to the end of 2025.

More information, including the consultation survey, and details of the five challenges, is available online: www.lakedistrict.gov.uk/partnership