Half of Keswick Railway Path Reopens 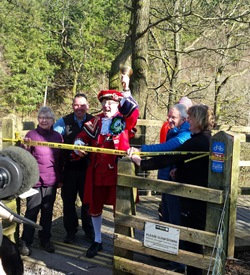 Keswick visitors and locals joined Town Crier, Bob Bryden, today (18 Mar) to celebrate the reopening of the raised boardwalk section of the Railway Path, ahead of the busy Easter period.

From family bike rides to morning runs, the flat scenic route is one of the most popular multi-access trails for people in the area and has been sorely missed during its partial closure following the December floods. Two bridges that cross the River Greta and around 200m of path were washed away during the floods and Rawsome Bridge was later closed to ensure public safety.

Since then, the Lake District National Park has been working on a plan to reconnect the route. The first phase is the repair and reopening of the raised boardwalk section, meaning people can start using around half of the route from Low Briery to Brundholme Road.

Cath Johnson, Area Ranger for the Lake District National Park, said: “We know how important this route is for local people so we’re delighted to be able to reopen this popular section of the Keswick to Threlkeld Railway Path ahead of Easter. 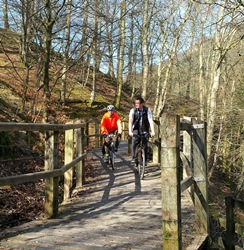 “However, as half of the route is still closed, and a permanent reconnection of the path is likely to take up to two years, we ask people to continue to take notice of the fencing and signs as these are in place to keep everyone safe. We are working with volunteers, landowners and other organisations to find safe alternative routes for people to use and we’ll share these as they are confirmed.”

New panels showing the latest access information and alternative routes are located at Keswick Station, the boardwalk under the A66 fly-over, Low Briery and at the junction of paths at Threlkeld/Whitehead Coppice.

Over the next few weeks, the LDNP will begin working with engineers to develop plans to remove the missing bridges from the riverbed and stabilise Rawsome Bridge, to prevent further damage. The river levels are gradually becoming low enough to make this work possible, however access will need to be created to allow the machinery on site.

Find out more about the Keswick to Threlkeld Railway Path reconnection and alternative routes currently available.