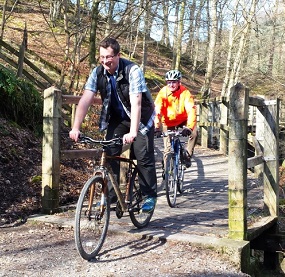 Since Storm Desmond in 2015, around half of the Keswick to Threlkeld Railway Path Multi User Trail (MUT) has been out of action, impacting on thousands of local people and visitors who enjoy the route every year. The Lake District National Park (LDNP) prioritised reconnecting this route, however it is a complex, major project that required significant work.

Today (15 December 2017), the LDNP announced a major funding boost to the project, thanks to a £2.5 million grant from Highways England and a partnership with the Lake District Foundation (formerly Nurture Lakeland) to jointly fundraise the shortfall of around £3m.

LDNP Chief Executive Richard Leafe confirmed the Keswick to Threlkeld Railway Path would be one of the Lake District Foundation’s first campaigns for 2018.

Richard said: “We’re delighted to partner with the Foundation to launch an ambitious and challenging fundraising campaign for the Keswick to Threlkeld Trail. We will be working together to secure funding from other grant programmes and encouraging local businesses, visitors and residents to play a part in this exciting project to bring the route back to life.”

Area Ranger for the north of the Lake District National Park, Cath Johnson, said: “This marks a significant milestone in the reconnection project and we are pleased to be able to begin the investigation and design works on site. And by having the support of the Lake District Foundation to fundraise for the project, we can start looking ahead to the development of the construction phase in 2018.”

The Department for Transport has allocated £100 million to Highways England (between 2015 and 2021) for a dedicated cycling fund to encourage more people to take up cycling. Funding is given to schemes which improve cycling facilities on or near roads and reduce the impact of roads as a barrier to cycling.

Bruce Parker, Highways England’s Head of Planning and Development in the North West, said: “We’re committed to making cycling easier around major A roads and over motorway junctions across England, and I’m delighted we’ve been able to provide funding for the Keswick to Threlkeld Trail. The route runs alongside the A66 and will provide cyclists and other users with a safe and accessible alternative to travelling along the road.”

Find out more about the project at: www.lakedistrict.gov.uk/keswickrailway

Photo shows cyclists on the boardwalk of the Keswick to Threlkeld Railway Path.