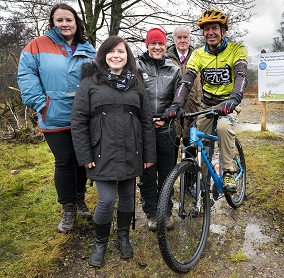 A £7.9 million funding package has been agreed to allow work to start on the final phase of reconnecting the Keswick to Threlkeld Multi User Trail which was severely damaged in Storm Desmond three years ago to the day (5 December).

Today is an important milestone in this complex project which has required significant work to get to this stage, and it is fitting that key funding partners and local users gathered to mark this development exactly three years since the fateful storm.

Funding has been approved so far from Highways England and the European Regional Development Fund. Additionally, community fundraising by the Lake District Foundation has resulted in a £130,000 donation all which will enable the project to go ahead.

Richard Leafe, Chief Executive of Lake District National Park said: “Storm Desmond caused unprecedented amounts of damage to communities, trails and bridges across the national park. This particular trail offers a great family-friendly, traffic-free route from town to village, it will be fully accessible to many people, such as cyclists, walkers and runners. It has taken some time but we have always been fully committed to making sure that it is reconnected for the benefit of all.

“Local fundraising has played a huge part in ensuring that this project can go ahead, demonstrating the strength of public feeling about this important trail. We’re thrilled that we now have the money in place to allow work to go ahead to complete the full reconnection of the Keswick to Threlkeld trail and make the route more resilient along the way.”

Construction contracts are currently out to tender and the trail construction partners will be announced in the near future. The aim is to start work in the New Year and have the route fully reopened within two years.

Highways England has committed a significant portion of the funding to allow this project to progress.

Bruce Parker, Highways England’s head of planning and development for the North West, said: “We’re delighted to be able to provide almost half the £7.9 million needed to restore and enhance the link between Keswick and Threlkeld, which was so badly damaged in Storm Desmond exactly three years ago and are looking forward to the re-construction work getting underway in the New Year.

“Highways England has set aside £250 million for projects like this focusing on supporting pedestrian, cyclist and other users of the road network. This money along with other special funds – for example supporting growth and housing and environmental improvements - is enabling us to provide environmental, social and economic benefits to the people, communities and businesses who live and work alongside our strategic road network.”

Sarah Swindley, CEO, Lake District Foundation said: “We ran a fundraising initiative this year and were completely blown away by the generosity of the local community and visitors to the area. We look forward to seeing the work start and progress over the next two years.”

During Storm Desmond, on 5 December 2015, two bridges that cross the River Greta and around 200 metres of path were completely washed away during the worst floods the county has seen and Rawsome Bridge was also later closed to ensure public safety.

Since then, the Lake District National Park has been working with key partners from the public and voluntary sectors on a plan to fully reconnect the route. As part of this work a value for money study was undertaken and concluded that the restoration of the route could bring back about £2 million a year to the local economy.

This next phase will ensure the entire route will be reconnected and can once again be enjoyed by the local community and visitors to the area.

The extensive works will include rebuilding and repairing the remaining 5 kilometres of the trail, and the re-opening and extending of the ‘big tunnel’. Additionally two new bridges will be constructed and another will be extensively repaired and improved. Also, 200 metres of brand new path will be created and work will be carried out to stabilise the river bank and repairing drains and walls along the way.

Photo shows key partners gathered at Brundholme where work will start along with some of the locals who are looking forward to the trail being reconnected.

Find out more on www.lakedistrict.gov.uk/keswickrailway