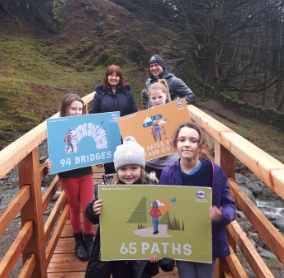 Over 40,000 metres of public rights of way have been reconnected through the £3 million government-funded Routes to Resilience programme. Funded by the Rural Payments Agency with money from the European Agricultural Fund for Rural Development, the project has replaced, repaired and increased the resilience of 94 bridges, 65 public paths and 44 gates, stiles and signposts since January 2017.

Led by the rangers from the Lake District National Park Authority, the final jobs at Bullfell Beck in Mungrisdale, Troutbeck Ford in Windermere and at Greenhead Gill in Grasmere were completed in January.

Lake District National Park Chief Executive Richard Leafe commented: “We’re delighted that the Routes to Resilience project has been completed to improve access throughout the park for local communities and visitors and has, importantly, increased resilience to potential future flooding.

“We couldn’t have done it alone and I am pleased that our partners are here today to take stock of the fantastic achievement of what we’ve delivered over the past 18 months”.

The celebration took place at the site of a new footbridge over Greenhead Gill, replacing the one destroyed by Storm Desmond.  Michael McGregor Director of the Wordsworth Trust recited from Wordsworth’s poem Michael, which is set nearby and captures the relationship between a farmer, his family and the land – a poignant reminder of qualities of this cultural landscape.

Michael McGregor of the Wordsworth Trust added: “It’s great to see so many bridges and walking routes being reconnected allowing people to enjoy this inspirational magical landscape as Wordsworth did, and importantly protecting it for many years to come.”

Antony Osborne-Ford, General Manager at the Macdonald Swan Hotel commented: “The Lake District is renowned for its stunning scenery. We’re delighted to see access being restored across this beautiful landscape for our guests and everyone else to enjoy.”

Various avenues are being explored for a further £2million funding to fully restore public rights of way damaged by Storm Desmond.  A separate project is also now underway to restore the Keswick to Threlkeld Railway Path.

Our photo shows Lake District National Park Chief Executive Richard Leafe and Jacquie Middleton from the Rural Payments Agency alongside some local youngsters who helped celebrate the completion of the Routes to Resilience Programme at Greenhead Gill Bridge in Grasmere.