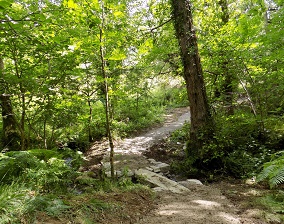 Rangers from the Lake District National Park are working this week to repair a popular woodland walk near Sharrow Bay Hotel on Ullswater.

Following the destruction caused by Storm Desmond in 2015, where an estimated £5.8million of damage was caused, the Routes to Resilience scheme is carrying out restoration work across the network of Public Rights of Way around the Lake District.

The flood recovery programme, which is funded by the Rural Payments Agency, is working to reinstate 64 bridges, surfacing and drainage work on 100 paths, and replacing 56 items of access such as stiles and gates, before September 2018.

As well as improving access, the work is designed to increase resilience so that any future floods are not as damaging to the Rights of Way network, or the local economy.

Ged Acton, Routes to Resilience project manager said: “It’s really important that we restore the routes around the Lake District to allow access for both the local community and the 17 million visitors that come to the area each year.”

This project has already delivered 30 jobs across the Lake District National Park - from major path works in Grasmere to resurfacing Helton Bridleway in the East, and restoring footpaths along the western shores of Derwentwater.

Ged Acton added: “It’s great that through the Routes to Resilience scheme vital support can be provided for local businesses, such as the Sharrow Bay Hotel as we’re seeing this week.”

Heather James, Marketing Manager at Sharrow Hall said: “The work being carried out by the Routes to Resilience team is hugely important for us and our guests, who love to take the path to Ullswater Way. The woodland walk is a fantastic asset for the hotel and we’re thrilled to see the necessary restoration being carried out.”

Image shows the pathway at Sharrow Bay that’s being restored