Festival goers take a virtual flight through the Lake District 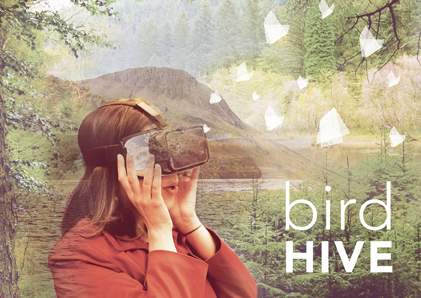 Lake District festival goers are being given the chance to soar like a bird, scale a mountain and ripple across the top of a lake – within just three minutes, by experiencing Bird HIVE – a 360 degree virtual flight tour of the iconic Lake District.

Inspired by the spectacular back-drop of the Lake District, a specialist digital team have created cutting-edge 360 drone films to illustrate the special qualities of the national park as a prospective World Heritage site. Because it uses 360 video, Bird HIVE will be a truly engaging and interactive experience for users. Festival goers at Kendal Calling, Lowther Deer Park (28-31 July), and Lakes Alive, Kendal (26-28 Aug) will be invited to step inside Bird HIVE and take an immersive virtual tour through the Lake District – all without leaving the festival. The 360 videos are hosted on a smartphone app which festival goers will access using Samsung Gear VR headset.

Bird HIVE allows people to experience for themselves some of the unique qualities of the Lake District and the reasons why this special place deserves World Heritage status. From its unique identity, through to the inspiration of the landscape and the desire to look after it for future generations to enjoy – Bird HIVE shares the themes which underpin the bid, currently with UNESCO for review.

John Hodgson, World Heritage Coordinator for the Lake District National Park, said: “The Lake District has been a rich source of artistic inspiration for hundreds of years and this is one of the central themes of the World Heritage bid. So we’re delighted to be part of a very modern, interactive digital art experience such as Bird HIVE, and share with festival goers the unique qualities of our culturally rich landscape. And once the festival is over, we hope people will feel inspired to step out of the virtual world and into the national park, experiencing for real just why the Lake District deserves World Heritage status.”

Sarah Allen, Festival Director for Lakes Alive, said: “Bird HIVE is an innovative, digital co-commission utilising some of the latest technology to connect festival audiences with the stunning landscape of the Lake District. By showcasing the experience at the two festivals, it will support Lakes Alive’s intention to establish the area as a modern, cultural destination, deserving the ultimate accolade and recognition of World Heritage status.”

Look out for Bird HIVE in Kendal Calling’s Lost Eden woodlands: an area tucked away from the main festival arena filled with newly commissioned sculptures, performance art, talks, pop up cinema and much more.